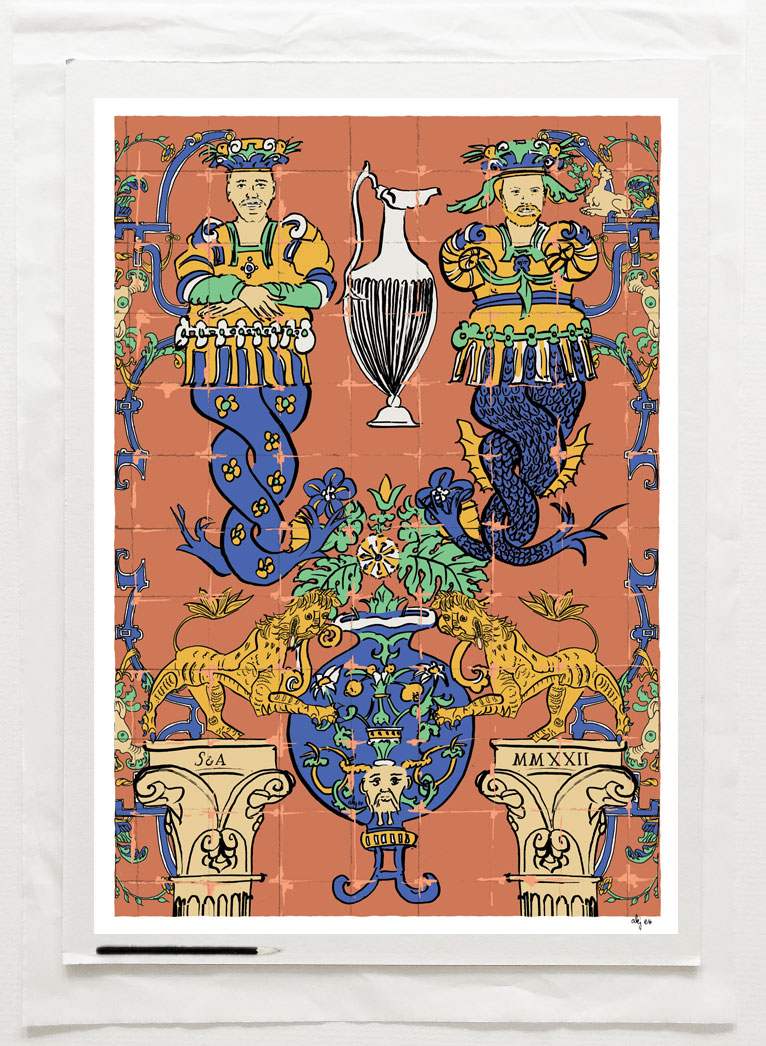 To mark the end of 2021 I have created an art print that looks to my roots.

You will find more about the making of this design in this note but first lets commence with a short festive poem.

‘Make merry, comrades, eat and drink
(The sunlight flickers on the sea),
The garlands gleam, the glasses clink,
The grape juice mantles fair and free,
The lamps are trimm’d, although the light
Of day still lingers on the sky;’

Sunlight On The Sea
By Adam Lindsay Gordon

In September 2021 I went with my partner Simon to Seville, where my family lives. Every time I go to Seville I make sure I find time to visit the Alcazar de Sevilla.

One morning I took my dad to the Reales Alcázares de Sevilla. Possibly one of the most beautiful historic buildings in Spain. It dates from the 12th century but has elements from the Roman period, the mesmerising medieval era with Islamic and early Christian influences, the Renaissance, Gothic and so on. The palace has the most stunning work of traditional tessellated and painted tiles.

Walking along the many rooms of the palace I picked very distinctive objects such as:

Back at my parents my young nephews arrived and I proposed to them that we all created a collage with very bright sheets of cardboard to depict the objects I had photographed from the Alcazar Palace.

So we created a collection of individual objects that can be arranged to form their own distinctive collage.

These are some of the results.

Back in Brighton, in my art studio I drew the elements again with ink. While I was drawing the figures I thought that the heads could be portraits of my partner and I.

The final process is the addition of colour digitally, and once I have the images I can proceed to create the final arrangement of the collage. I love creating formal symmetries and relations between the objects.One more step was the addition of the tile effect made with two superimposed ink drawings of a grid for the grouts and drawn scratches to form the usually chipped corners of the tiles.

Once completed I showed the final draft to two of my best friends. They got so excited that they commissioned me versions with their portraits, dedicated arrangement of objects and colours.