‘Chinoiseriez’. My own dragons print.

The design of this dragons print reflects on two linked cultures; the South Asian classic art of the 14th century and the European Chinoiserie art style of the 18th. century. It has also a particular interest in the work by the artist Cheng Rong.

In 2013 I was fortunate to visit the iconic exhibition at the V&A in London ‘Masterpieces of Chinese Paintings 700-1900‘ that had some of the most remarkable examples of Chinese painting from 1200 years of tradition.

Among many beautiful drawings and prints of this exhibition, the artwork ‘Nine Dragons’ struck me as an absolute gem. The artist Chen Rong in 1244 created this masterpiece. The Museum of Fine Arts in Boston lent it to the V&A.

‘Nine Dragons’ is considered the oldest and finest dragon scroll. The design expresses these mythical creatures in different conjectures and attitudes amidst clouds, water and mountains. It represents the dynamic forces of nature in Daoism. 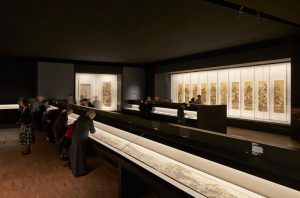 My training and work experience as an architect has influenced my expression and medium in my art. Ink as a medium to produce architectural technical drawings developed into a side-line interest in calligraphic art.

The line in architecture often has a defined thickness. The use of special brushes, pens and calligraphy nibs opens the artistic expression to a dimension where by rotation, pressure and movement produce a variation in footprints and a curvaceous strutuctre.

Below you can explore my process of creation. It stars with an initial drawing full of movement that in a second stage is consolidated into simple drawing to finally create a detailed design.

The seaside Regency architecture of the Brighton Royal Pavilion

The second element included in my design is a building, The Brighton Royal Pavilion. Currently a wonderful museum that was built as the former royal residence of the Prince Regent.

It is located in Brighton in the South East coast of England. and it s construction begun in 1787.  It was built in three stages as a seaside retreat for George, Prince of Wales, who became the Prince Regent in 1811, and King George IV in 1820.

The architectural complexity of the this building can easily be assessed by reading the below extract from Historic England that describes the East Facade: ‘ EXTERIOR: East Front: composed of 5 distinct parts, symmetrically arranged around the 7-bay colonnade of the rotunda; 3 French doors, each with pointed, trilobed heads and glazing bars of original design, open into the saloon; these window heads, inspired by Mughal architecture, are repeated throughout the fabric; columns in Bath stone have an octagonal socle, leafy base, octagonal shaft, and flaring, leaf capitals which terminate above the diamond crenellated parapet in octagonal pinnacles. The design of these columns repeated throughout the fabric, applied in many instances to pilasters. Between the tops of each pair of the rotunda columns is a screen of pierced quatrefoils arranged in intersecting S-curves which are formed from the lines of the horseshoe arches; above the centre bay of the colonnade in the parapet are the arms of the King and an inscription: “HRH George IV MDCCLXXXIV”. ‘

Dragons in Asian culture means prosperity. They are the ultimate benefactors. Often appearing in the most intricate and elevated form or arts. Below you can see from ‘The Sir Joseph Hotung Gallery of China and South Asia’ from the British Museum a set of magnificent Ming dynasty dragon tiles, comprised of beautiful, large, high-relief tiles, made in sets to form a series of friezes showing blue-and-yellow dragons among lotuses. 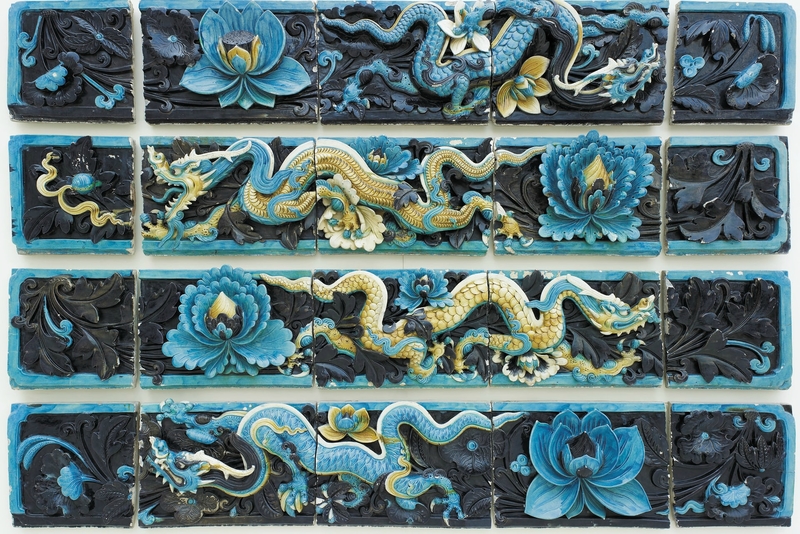 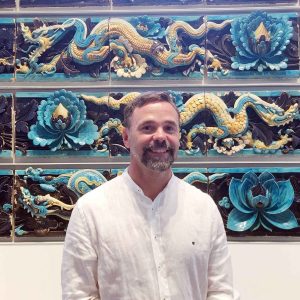 In the summer of 2020 as part of a new commission I carried out further research into occidental representation of Asian art and motifs. This studies have led me to the creation of a new triptych group of prints that I have subsequently named ‘Chinoiseriez Life triptych’.

Together, these prints create a celebration of joy and colour. The design travels through calligraphic art; the seaside Regency architecture of the Brighton Royal Pavilion, Chinoiserie architectural Victorian ornamentation and classic 13th. century Southern Chinese dragons.

Each one of the prints have the folllwing titles: 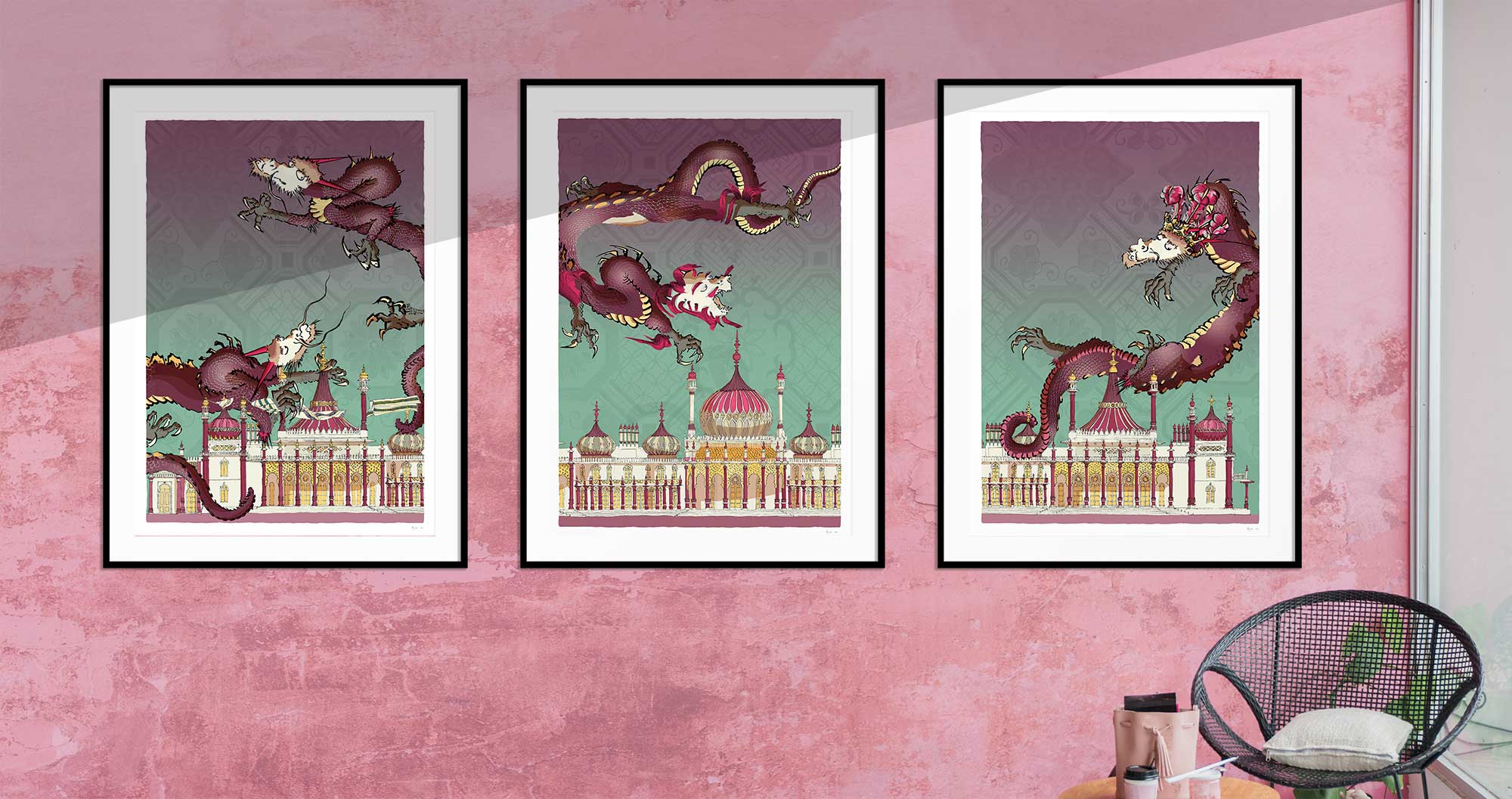 In the summer of 2020 I revisited my 2012 original ‘Chinoiseriez’ print. It was the result of a private commission that requested the use of royal green and gold hues.  This revised design adds notes of early 20th century Asian inspired decorative arts motifs and continues the them of  historic collage which includes elements of Regency architecture of Indo-Saracenic style,  Chinoiserie interiors, classic calligraphic South Asian art. 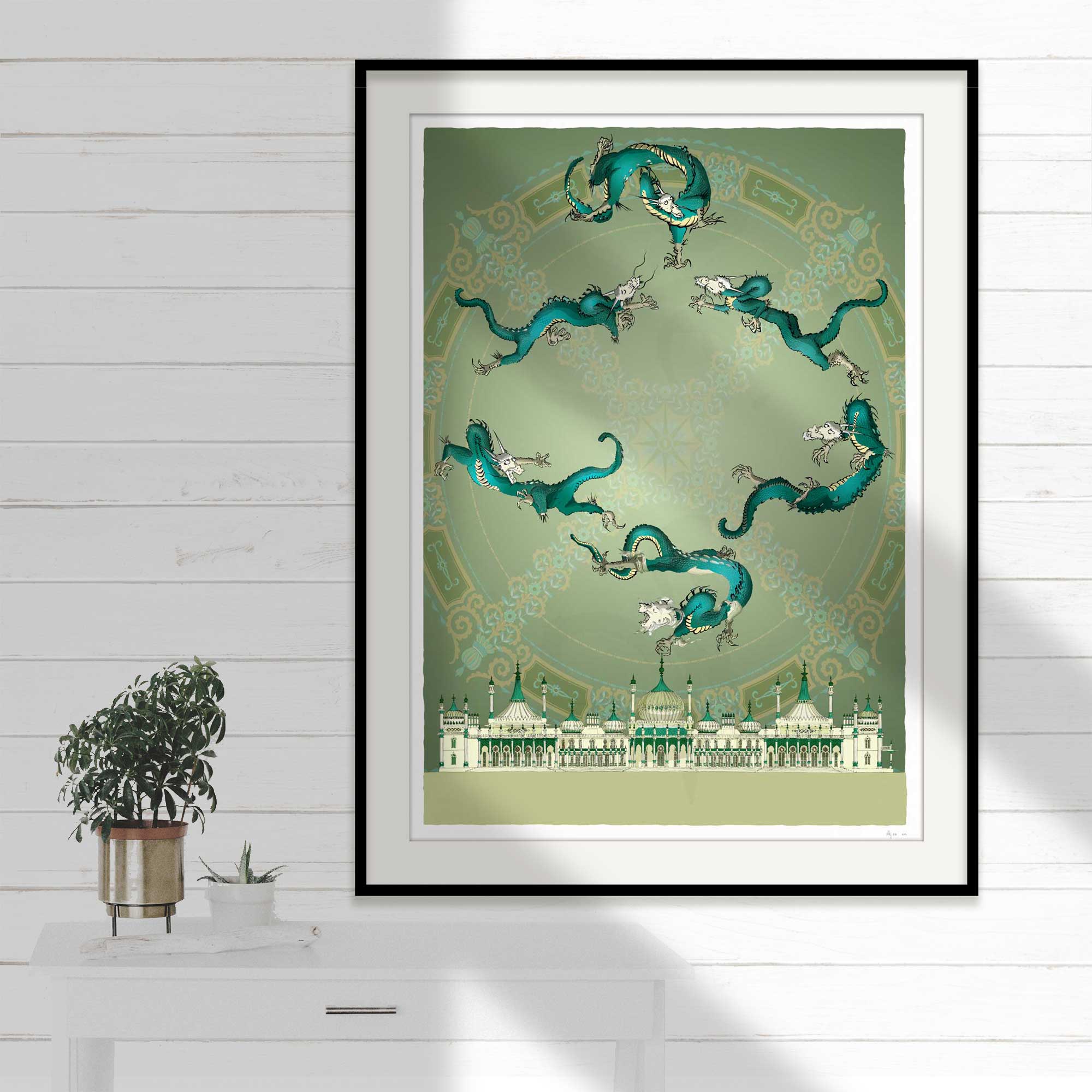 In 2012 I completed my print ‘Chinoiseriez’ and presented it for the first time at the Brighton May Open House Festival. It became a contagious exhibition that extended to old a new friends. As a fun piece I created a range of clothes that followed the theme.

Finally if you would like to purchase one of my prints you can do so by visiting my gallery in this link with a selection of my favourite and best sellers ‘Chinoiseriez’ prints.