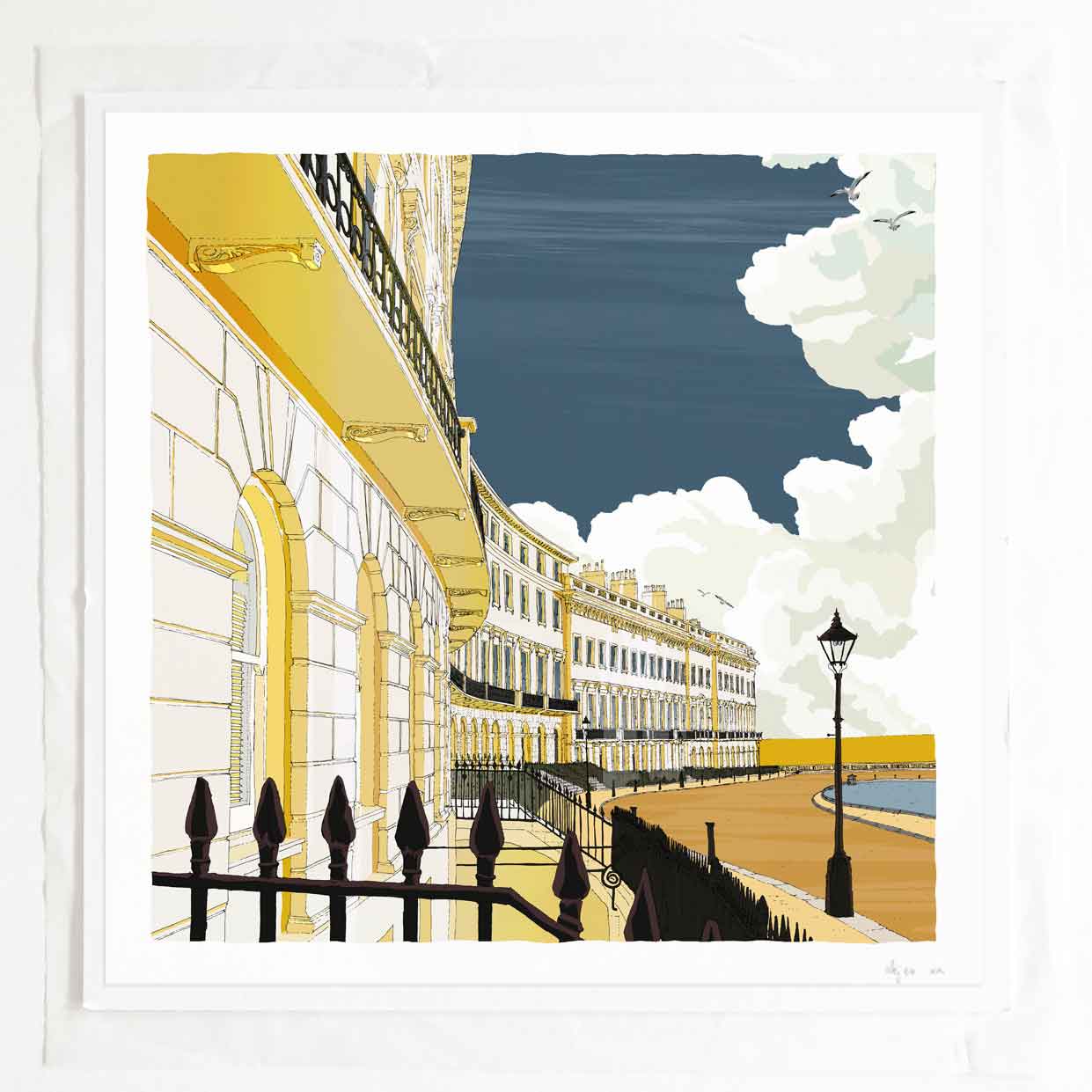 Architectural print of  the South-East corner of the magnificent Adelaide crescent in Hove with its commanding views of the English Channel.

From original ink drawing to which I apply colour digitally. Printed on fine art paper using archival inks, as part of a limited edition of 100 prints. Each one of them individually sign, titled and editioned.

A dynamic piece of mid-19th century architecture. This East section as shown in my print has a double curve that visually leads you to the end  to meet the Sea. Together with neighbour Palmeira Square forms one of Hove’s most important architectural set-pieces.

Decimus Burton created the designs which works started in 1830. His original design, as exhibited at the Royal Academy, consisted of a half-moon-shaped sea-facing crescent, At that time, immediately to the north what was going to be the largest glass dome in the World was being built, the Anthaeum. Though tragically on its opening day in 1833, the structure spectacularly collapsed. After this disaster the building works at Adelaide crescent stopped.

following the clearance of the Anthaeum debris, around 1854 Another nine houses were built on the east side in a much simpler style, 19 houses were erected facing them to the west, and the shape of the crescent was amended so it opened out at the top and connected both sides with the south ends of Palmeira Square.

My art print depicts the end East corner, This was the first and finest section of the Crescent to be built.

The façade starts with a typical lower ground level with a front patio and bridges with black painted railings leading to the main entrance doors. The Ground floor is a beautifully rusticated render plinth with a semi-circular window. At first level there are individual bottle baluster balconies with pedimented windows, and a large pediment over the central house on the south. The top of the façade is finished with a gigantic  cornice and a continuous solid bottle baluster parapet. This is supported by large projecting corbels, if you look close you can see between these corbels small windows cunningly hidden in between.

This building is representative in Brighton of the transition from Regency to Victorian architecture, from Georgian motifs into Italianate style, with Neo-Renaissance or Neo-Neo-Palladian overtones.

Architectural historian Nikolaus Pevsner claimed that the crescent as a whole was “of little architectural merit, though of architectural interest” because of how it demonstrated Brighton and Hove’s stylistic evolution in the 19th century, he also stated that the heavy bracketing of the eaves on this section “shows at once that we are on the way to the Victorian age

Sources:Wikipedia  and The Friends of Palmeira and Adelaide