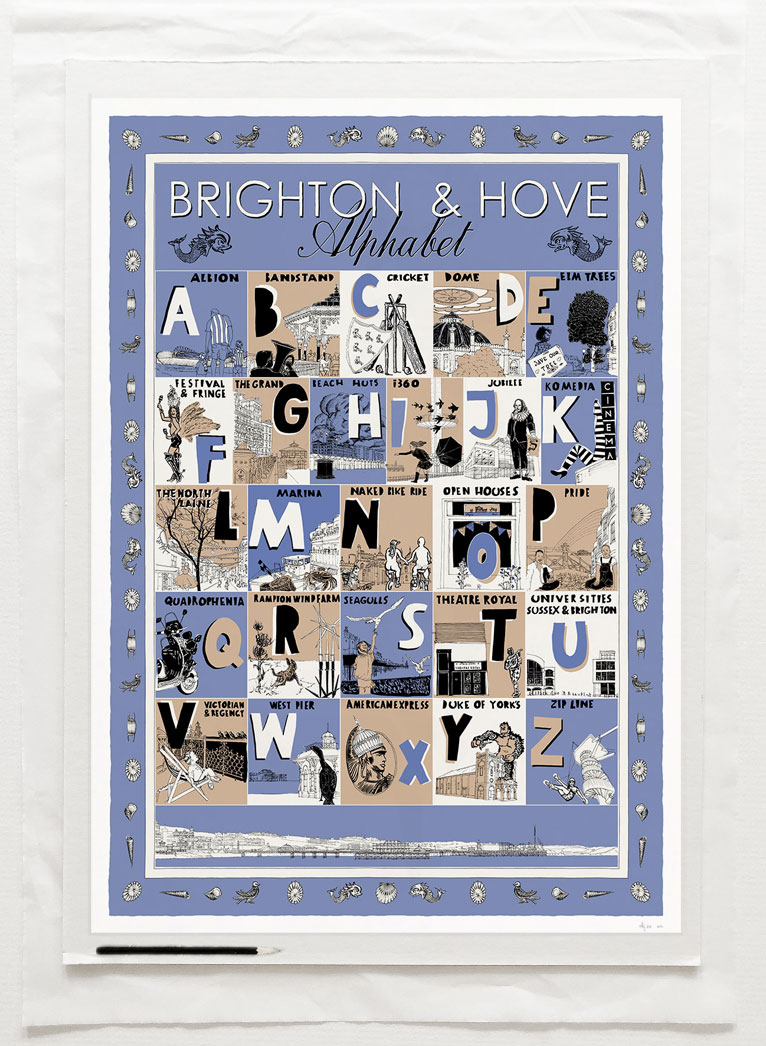 An illustrated Brighton and Hove Alphabet print available in the following sizes:

If you would like it framed please send me a direct message, prices from £71.

About my Brighton and Hove Alphabet

The city of Brighton and Hove is the subject of many of my prints. I have subsequently followed this theme for the creation of my alphabet.

In addition as an architect this aspect also features prominently in my alphabet, however instead of just creating an inventory of relevant buildings I have aimed to describe the city essence, the seasons, the arts, the sports, the history, the weather, the natural world, the flora, the fauna and mostly the people out and about in the city of Brighton and Hove.

Therefore each letter of the alphabet creates a scene with stories that unfolds.  Each illustrated letter carries out a narrative that talks about things close to all of us such as companionship, history, dance, freedom, walks, theatre, dance, nature, the seasons, travel, joy, the weather, music and more. 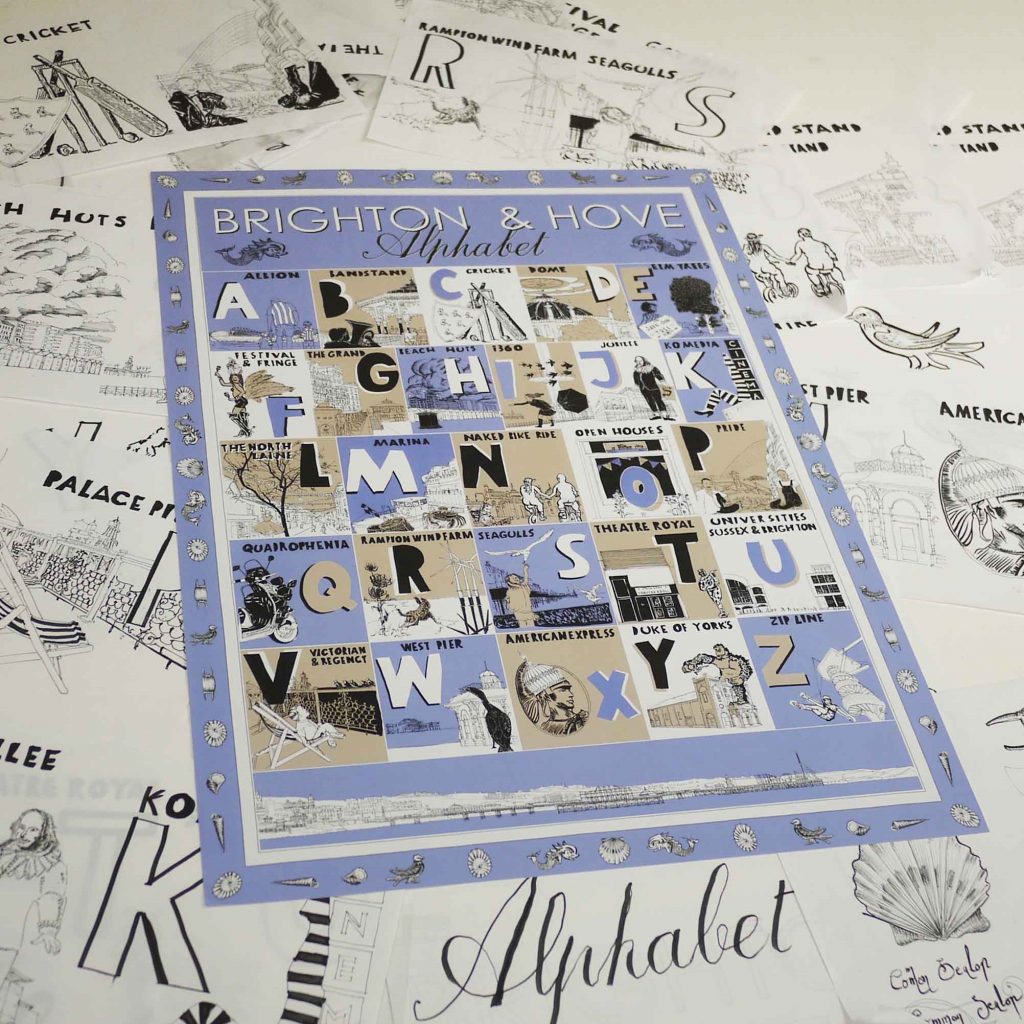 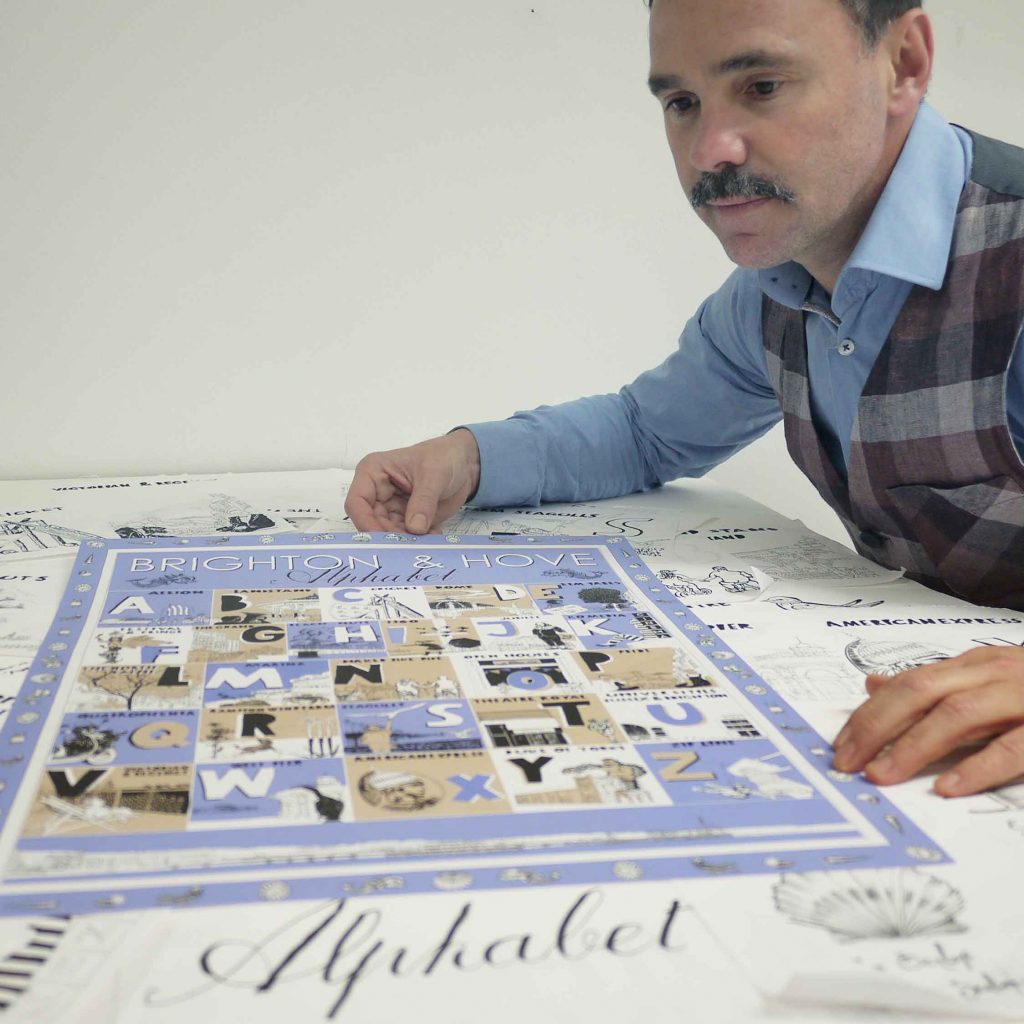 Many artists at least once in their life tackle the task to create an illustrated alphabet. Of course the design of it has to consider many aspects such as the graphic expression, the medium, the selection of the type fonts, the relation of the letters and its illustration, the general composition and the emotional feel.

This year I saw some outstanding alphabet designs by traditional and contemporary artists and this gave me the push to create my very own. In addition the expression of my alphabet resonates with the work of other artist such as the contrasting linocuts of Edward Bawdem; the freedom of expression and individuality of John Nash; the expressivity of Eduard Ardizone and finally the quality of graphic design and capacity to convey humanity of Barnet Freedman.

On the whole, the design has been a collective endeavour. In fact I consulted fellow artists,  friends and my partner for their particular views and ideas. Furthermore I had to balance them all and the hardest part was to decide what to leave out. While developing the Alphabet I realised that I was putting together a graphic record of our times in Brighton and Hove with connotations from the past, the present and possibly what we are leaving as our legacy for the future.

It so that every letter unfolds a story:

A is for Albion

In 2018 the ‘Seagulls’ made it to the premier league during the 2019–20 season. In 1977  the Albion introduced the Seagull badge and they have remained the Seagulls ever since.

B is for Bandstand

One of the finest in England the bandstand with its decorative arches create the perfect picture frame to the sea and the Brighton and Hove promenade. The exotic design of the bandstand is comparable to ‘oriental’ buildings such as the Alhambra in Granada and the Alcazar in Seville. The cities where I was born and raised. A home away from home.

C is for Cricket

D is for The Dome

Brighton and Hove love this arts venue. It was originally built as the stables for The Prince Regent. The architect Robert Atkinson  renovated this space to improve its capability as an auditorium in 1934 with a wonderful decorative internal ceiling. The Dome is currently being extended and renovated ready to awe new audiences.

E is for Elm trees

This side of the South Downs Natural is one of the few areas where elm tree still lives. Recently they were decimated by Dutch Elm Disease. When you see one give it a good hug!

F is for May Festival and Fringe

Two festivals combined form one of the largest cultural events in the UK. Every May the City of Brighton and Hove shines with the lime lights of music, dance, theatre and arts. Leave your diary free!

G is for The Grand Hotel

The beautiful iconic landmark and luxurious destination at Brighton and Hove seafront has been witness to many famous guests, including ABBA who partied in the appropriately named first-floor Napoleon Suite following their 1974 Eurovision Song Contest win with their performance of ‘Waterloo’.

H is for Beach Huts

I like to call them ‘city beach huts’. they are  an extension to many home parlours. The place to see, be seen and meet new and old friends. In my alphabet I have portrayed the beach huts with the Hove Plinth that currently has a sculpture by Jonathan Wright called ‘Constellation Maquette’  that includes key features of Hove such as the Hove Amber Cup, the Hove Ship, the West Blatchington Windmill, the Rampion Wind Turbine, the Cricketer, the Queen Victoria Bust, the Special Effects Cine Camera from  1899/1900, the Elm Tree, the Skateboarder and again the Beach huts.

The latest addition to the City of Brighton and Hove seafront that continues with the tradition of the Victorian leisure spirit. Escape to the sky with a flight 450ft up to take in Brighton’s best view.

J is for Jubilee Library

This modern building is winner of numerous architectural design awards and in terms of visitor numbers and loans, the library is one of the busiest in England. Come and meet old mythologies covered with old and new embroideries.

K  is for Komedia

Winner of the Best Venue in the South of England for comedy, music, cabaret and club nights, home to the Krater Comedy. You can also see alternative cinema or even a Royal Opera transmission.

L is for the North Laine

The North Laine together with the Lanes are the old heart of Brighton and Hove with its shops and restaurants. In my print I show my art studio, it is the top right window. Come and visit!

M is for Brighton Marina

You can reach the marina on the Volk’s Electric Railway that opened in 1883. You will find a place with a vibrant quay with yachts, sailboats, shops and restaurants with the backdrop of the beautiful white chalk cliffs. On Sundays go to the cinema or find a treasure in the Market.

N is for The Naked Bike Ride

Brighton and Hove bares it all every year in support of a sustainable future less dependent on fossil fuels.

O is for Artists Open Houses

Visit homes, buy art from the artists.  Every weekend in May and before Christmas come rain or shine Artists  Open Houses Festival is the most friendly event in the UK. I have proudly participated in it since 2013. Life is art and lives at home! you can see an article about my Alphabet at the Artists Open Houses website

P is for Pride

Mix your colours together at Brighton Pride . Brighton and Hove celebrates social advances and shout for injustices in the UK most popular LGBTQ+ family and friends street party.

Q is for Quadrophenia

Legendary nineteen-sixties Mods and Rockers against the soundtrack of The Who’s 1973 album under this very name.

R is for Rampion Wind Farm

Blowing a hooley Rampion Offshore Wind Farm generates green electricity to power the equivalent of around 350,000 homes, almost half of the homes in Sussex! The wind farm comprises 116 turbines on a 70 square kilometre site located between 13 and 20 kilometres off the Sussex coast in the English Channel. Takes its name after The Rampion Flower, also known as The Pride of Sussex.

S is for Seagull

And for the love of the sea. John Masefield’s famous poem goes like this: ‘ I must go down to the seas again, to the vagrant gypsy life, To the gull’s way and the whale’s way, where the wind’s like a whetted knife…’

T is for Brighton Theatre Royal

Book your ticket for West End musicals and plays, along with performances of opera and ballet. Make your applause long, loud, and sincere. The Theatre Royal is Grade II Listed and is currently run by the Ambassador Theatre Group. In 1806 the Prince of Wales gave Royal Assent for the theatre to be built and it opened on 27 June 1807, with a performance of William Shakespeare’s Hamlet. The Redgrave Family, Laurence Olivier, John Gielgud, Charlton Heston, Marlene Dietrich, Margot Fonteyn, Rex Harrison, Judi Dench and Paul Scofield all performed there.

U is for Universities of Brighton and Sussex

The young heart of the city. Brighton University roots can be traced back to 1858 when the Brighton School of Art was opened in the Royal Pavilion. Did you know that Sussex University counts 5 Nobel Prize winners?

V is for Victorian and Regency

The two periods in history that shaped the City of Brighton and Hove and established it as the fun place to enjoy the sea breeze and if you dare take the waters.

W is for The West Pier

For almost a century and a half the West Pier has been Britain’s most iconic pier. Renowned for its wonderful architectural style, it has been visited and enjoyed by millions and even today its sculptural remains casting its beauty over the seafront. In 2019-20 I had an exhibition at the West Pier Trust Centre.

X is for American Express

What started in 1850 as a freight company in Buffalo USA today is the largest employer in Brighton and Hove.  American Express is a well established and renowned company, it brings with its international crew colour and vibrancy to the City of Brighton and Hove.

Y is for the Duke of York’s Cinema

Built at the cost of £3000 by actress-manager Violet Melnotte-Wyatt. It opened on 22 September 1910 and was one of Brighton’s first picture palaces and also one of the first cinemas in the world. Are your preferred seats the comfy sofas in the balcony?

Z is for the Zip Line

Come fly with me above the Brighton Palace Pier. I hope you enjoyed the ride! 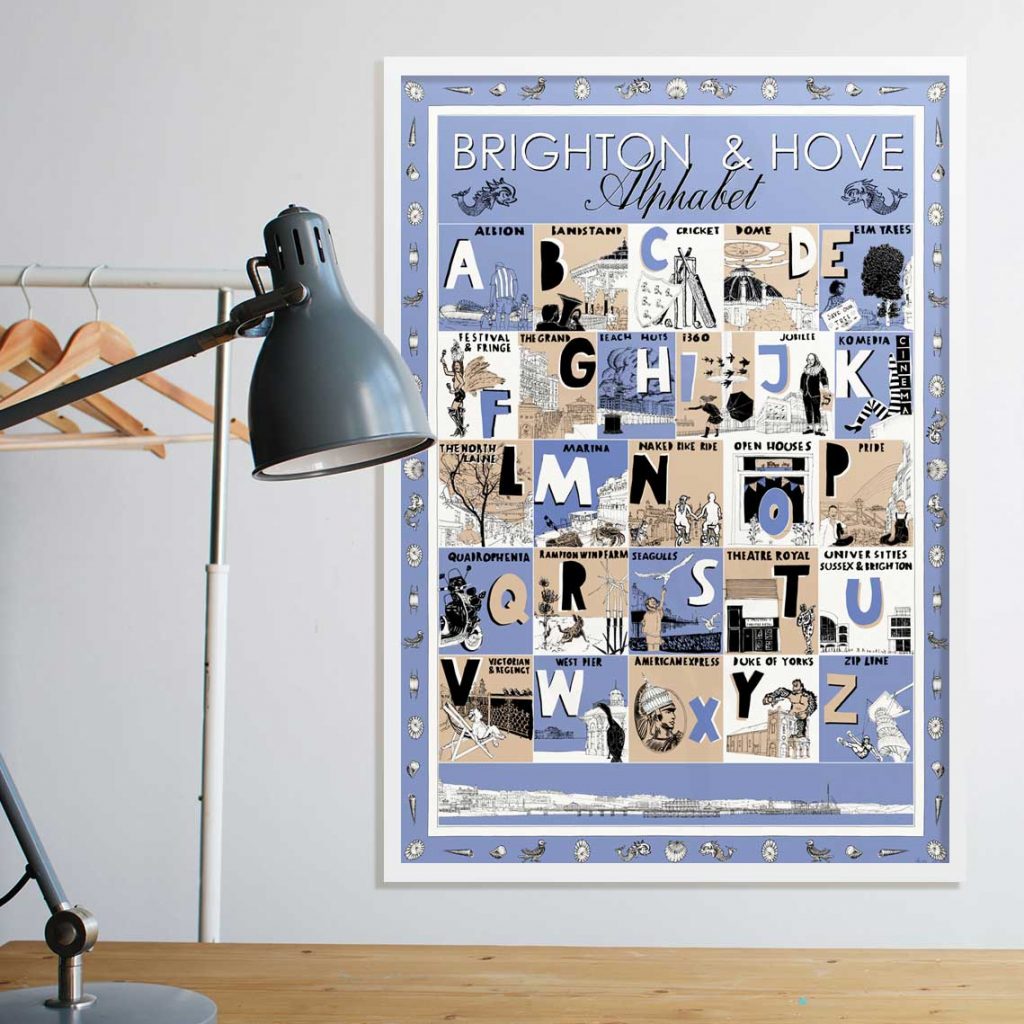