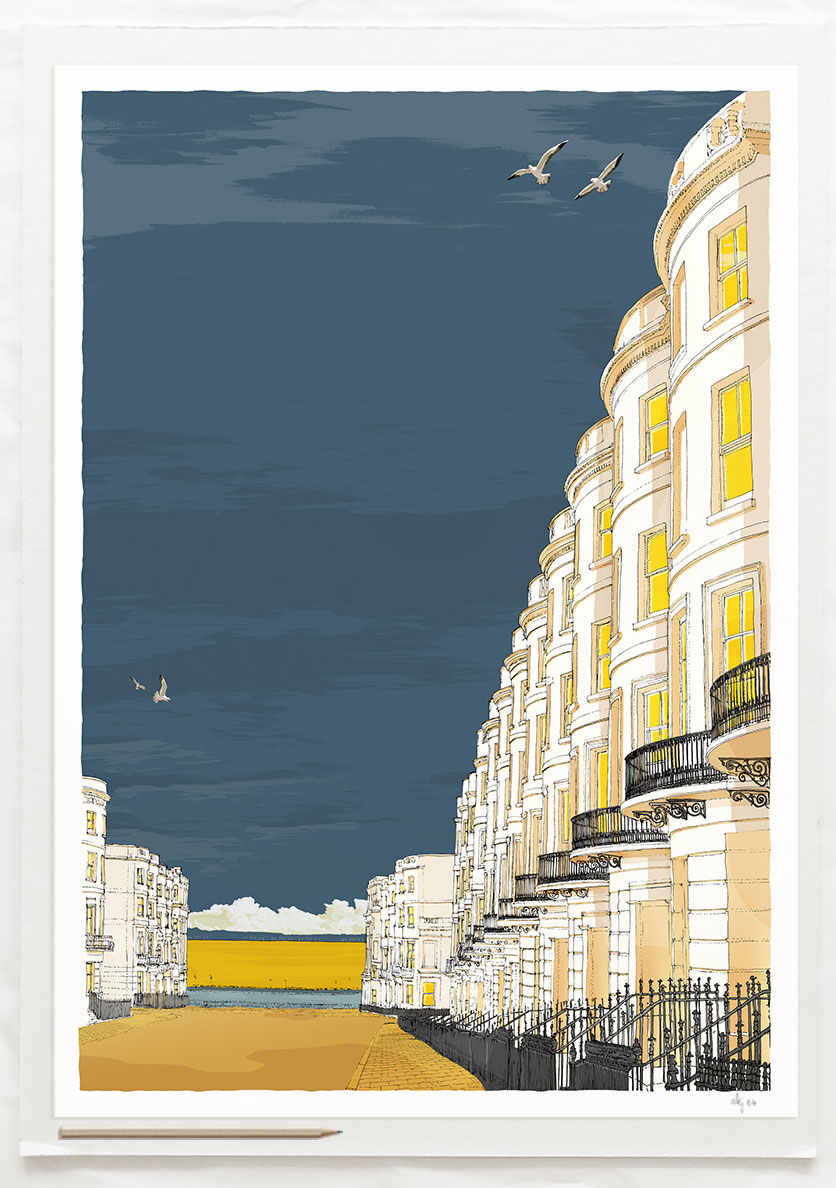 This print looks out to sea from Regency Brunswick Place in Hove. These houses have sought after sea-views provided by typically Brighton bow fronted houses. Brunswick Place was finished by 1828. Designed by Charles Augustin Busby. Occupants of Brunswick Place could be said to be a typical Hove mix of the 19th century with a few private schools, several wealthy widows, a number of clergymen, some eminent military personnel and a light sprinkling of titles.

Brunswick Place is divided by Western Road. Originally the architect design for lower Brunswick included a grand ballroom, 50 feet long and 40 feet wide with an arched ceiling 30 feet high while the outside façade resembled a classical temple. Three houses were built instead

Upper Brunswick Place stands to the north of Western Road, It was not until a second Act of Parliament in 1851 that enlarged the jurisdiction of the Brunswick Square Commissioners and building work began on the rest of the houses. By 1854 some 38 houses were built and occupied and by 1859 the number had risen to sixty-four.

English Heritage listed in 1950 nos. 9 to 69 as level II. Below I have simplified the description of the listing, which otherwise can be too technical:

The facades are finished with stucco over brick, the roofs with slate.

The hill falls down to sea, creating a view that is very much iconic and representative of the Brighton and Hove streetscape.

The houses are 4 storeys high with the addition of attic and  basement, only Nos. 9 to 13 have deep bow-fronts, The rest have  curved bays with three windows.  Some attic windows are inserted between pilasters in parapets, others with baluster parapets.

The large cornice is moulded with a dentil block design. The windows have moulded surrounds. There are beautiful cast-iron balustrades to the balconies at first floor and the stucco on the façade is rusticated at ground floor with pilaster doorcases.

Most doors have half-glazed panels with leaded lights and the lower ground front patios are guarded with cast-iron railings and bottle balustrading.