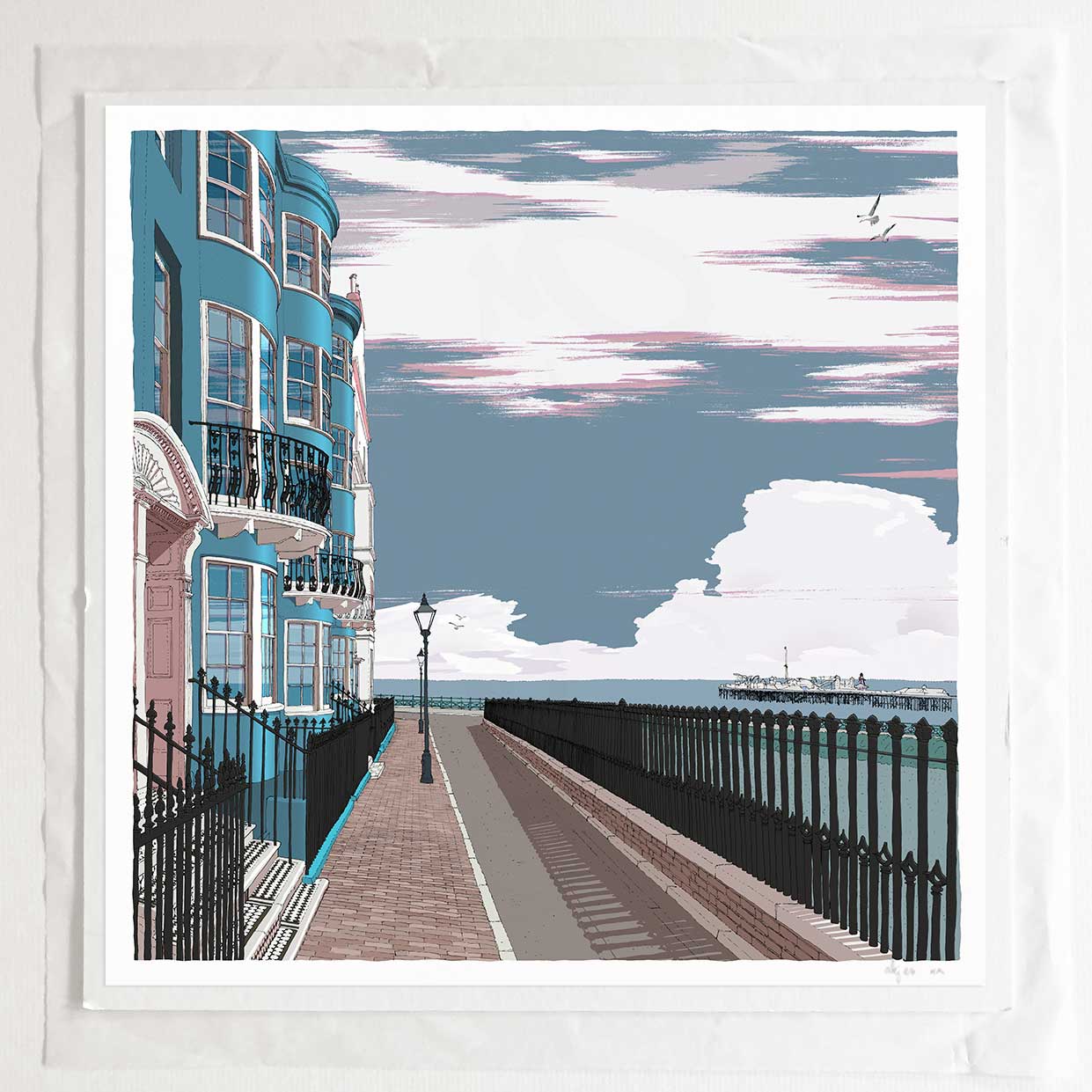 This art print depicts the architecture of one of the earliest Brighton Squares. The South-East corner of New Steine in Kemptown. This terrace has Brighton typical bows that look sideways to the sea and the Palace Pier.

I created this print from my original ink drawings to which I apply colour digitally. Printed on fine art paper using archival inks. From a limited edition of 100. I individually sign and number each print. This print is available in the following formats:

New Steine (1790–95, but refaced in the 1820s) was the first sea-facing square. It is located to to the east of the town centre, between Marine Parade and St James’s Street, opposite which the Chain Pier was built. It was laid out after 1776 and developed piecemeal starting with 17 houses by 1795 and by 1822 with 314.

The New Steine Pleasure Ground was assigned by Philip Mighell by direction of Edward Thunder Jr and others, to John Hall, surgeon in August 1806 on condition that it was ‘not to be built upon or encroached upon and used solely as a pleasure ground.  With liberty to place steps or stairways to the beach below the cliff and to place bathing machines on the said beach. The gardens were taken over by Brighton Corporation in 1884.

English Heritage listed in 1971 nos. 28 and 31 at New Steine as level II.  Below you can read a simplified version of the description in the listing, which otherwise can be too technical:

28 and 31 at New Steine is formed of terraced houses dated early C19.

The facade is finished in stucco with slate and tile roofs. Nos 28 and 29 have a  parapet

The houses varies from 3 to 4 storeys, with attics and basements with front lightwells.

Nos 29 and 31 entrances have a flat-arch paired and framed by fluted pilasters, console brackets and cornice,

Nos 28-29 topped by segmental pediment with raking cornice and a tympanum decorated with a sunburst. The door jambs and soffits of the entries are panelled with plain overlights above each entry.

To the side of each entry there are segmental bays with tripartite windows.

The first bay at No.28 is 3 storeys, the rest are full height.

All the windows heads are flat arched and at first floor there are balconies with cast-iron railings.  and over the top floor a denticulated cornice and blocking projecting course.