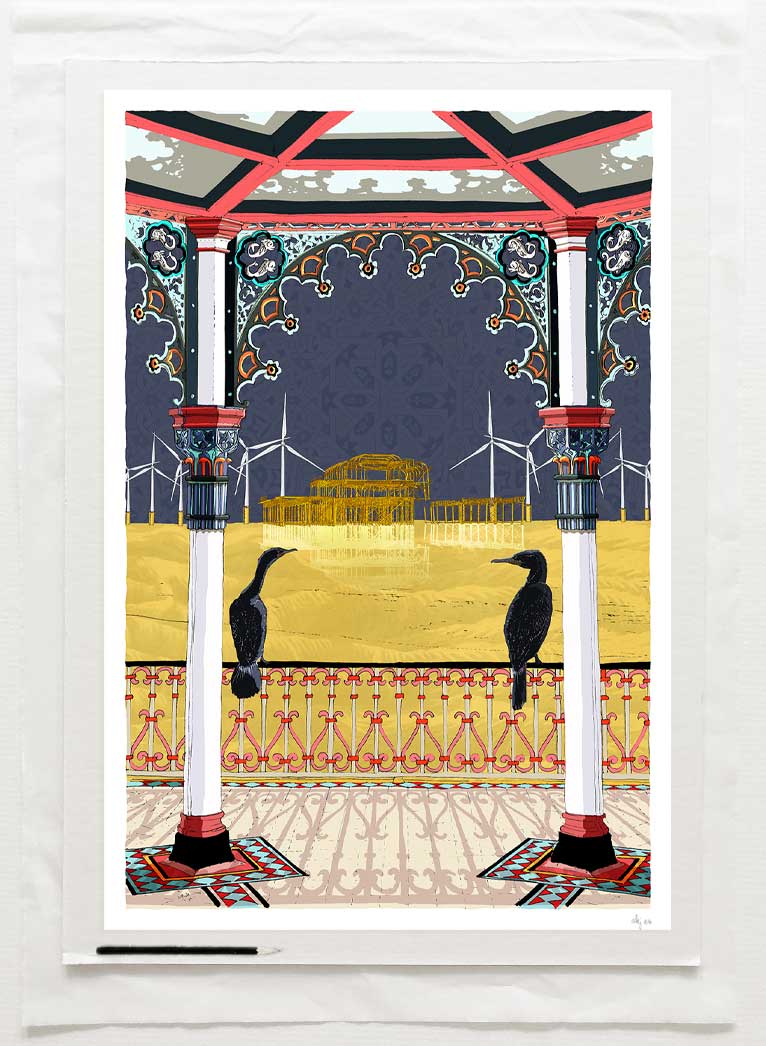 Standing like talismans, two distinctive cormorants watch over the remains of the luminescent Victorian West Pier resting under the arches of the Brighton Bandstand.

The extraordinary design with its lobular arches and fluted capitals with crossed natural leaves of the bandstand has been compared to the Alcazar in Seville or the Alhambra in Granada. Since I was born in Granada and lived in Seville, the vision of the Bandstand brings a home away from home.

Brighton’s ‘birdcage’ bandstand is one of the finest surviving Victorian bandstands. It was constructed in 1884 as part of a wider scheme of improvement for the town’s western seafront. The entire structure was designed by Brighton Council’s surveyor, Philip Lockwood, who was also responsible for many other iron structures on the town’s seafront, including several shelters and the Madeira terrace and lift on the eastern esplanade. All of these structures, including the bandstand, were manufactured by the Phoenix Foundry in nearby Lewes, and their name can be seen on almost all of Brighton’s ironwork, from the Palace Pier to the railings and lamps that line the seafront.

The West Pier was constructed during a boom in pleasure pier building in the 1860s, during which 22 new piers were erected across Britain. It was designed by architect Eugenius Birch as a place for seaside visitors to enjoy fresh sea air. Some wealthy residents in the nearby Regency Square objected to construction, complaining that the planned toll houses at the entrance would spoil the view of the sea from their homes. It was felt that the pier would have a positive effect on property values in the town, so the pier was approved. Construction began in 1863 and the pier opened to the public on 6 October 1866.

The pier suffered structural damage due to the Great Storm of 1987, and access from the shore was removed for safety reasons in 1991. The West Pier Trust continued to offer regular tours of the pier throughout the 1990s.

In December 2002, the pier partially collapsed during a storm, when a walkway connecting the concert hall and pavilion fell into the sea.[19] The following month, the concert hall in the middle of the pier fell over, leaving the entire structure close to total collapse.

On 28 March 2003, the pavilion at the pierhead caught fire. Fire crews were unable to save the building from destruction because the collapsed walkway prevented them from reaching it. As fire investigators were unable to access the site for safety reasons, the cause of the fire remains unknown, although it is thought to have been arson. A more severe fire, also thought to have been intentional, burned through 11 and 12 May 2003, consuming most of what was left of the concert hall. On 23 June 2004, high winds caused the middle of the pier to collapse completely. The following month, English Heritage declared the pier beyond repair. (Source Wikipedia)

Through the Brighton Bandstand and towards the West Pier Orient Nights

Beneath this mighty self in the breeze:

Leaped to the strong blue.

Found the rich sea out of the invites.