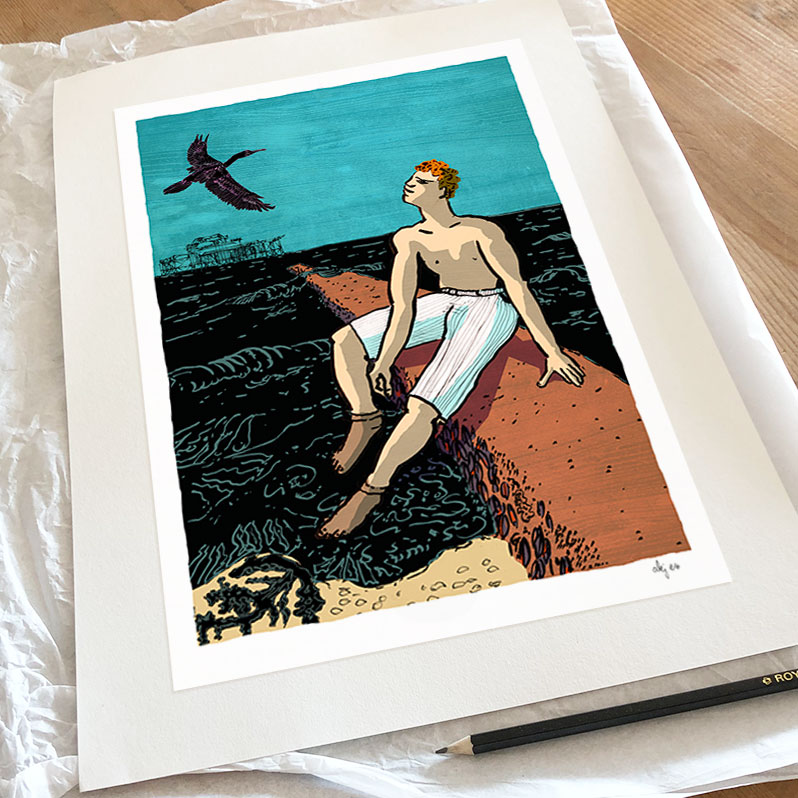 The Bather and the Cormorant

‘The Bather and the Cormorant.’

This print shows a bather with striped white knee long swimming shorts seated on a concrete pier with his feet in the water. In the horizon above the waves stands the remains of the West Pier in Brighton whilst in the sky a cormorant passes by with its iridescent coat of slate colour feathers.

The creation for this print has some complexity. Starting with a drawing event I ran where I studied Glyn Philpot’s painting and Leda and Zeus. This followed the experience of a short stay in the countryside next to a lake with swans and a subsequent drawing, finally I brought this design home to the beach by the West Pier. As a contrasting note I like to point out the whiteness of the swans, white as snow whilst cormorants are dark as slate.

I created this print from my original ink drawings to which I apply colour digitally. Printed on fine art paper using archival inks. I issue the formats A1 & A2,A3 and A4  as limited editions of 100 where I individually sign and number each print.

Bathers by the West Pier

From Victorian times, bathing in the sea became fashionable. It was practice to strengthen general health and improve fitness.

By the mid 18th century and Brighton’s proximity to London made it a good alternative to spa towns such as Bath. Even Dr Richard Russell in the 1750s, famously recommending not only swim in the sea, but also drink the salty water.

This print belongs to the series of prints I have created under the name ‘Beach Art’. This series celebrates people happily spending their leisure time at the beach. Swimmers, divers, paddleboarders and the occasional tight-rope walker. Shimmering seas and bright sunny skies bathe with light these characters.

With a hint of nostalgia that looks at the heyday of Britain’s seaside, these designs have my distinctive style and pay homage to the works of artists such as Robert Tavener and the New Romantic British artists John Minton and Keith Vaughan.The West Pier appears in most of the prints in the series.

I started this series in the spring of 2021 to mark the start of my art residency with the West Pier Trust.