Panoramic print of the Red Roofed Hut in Rye Harbour and Camber Sands. 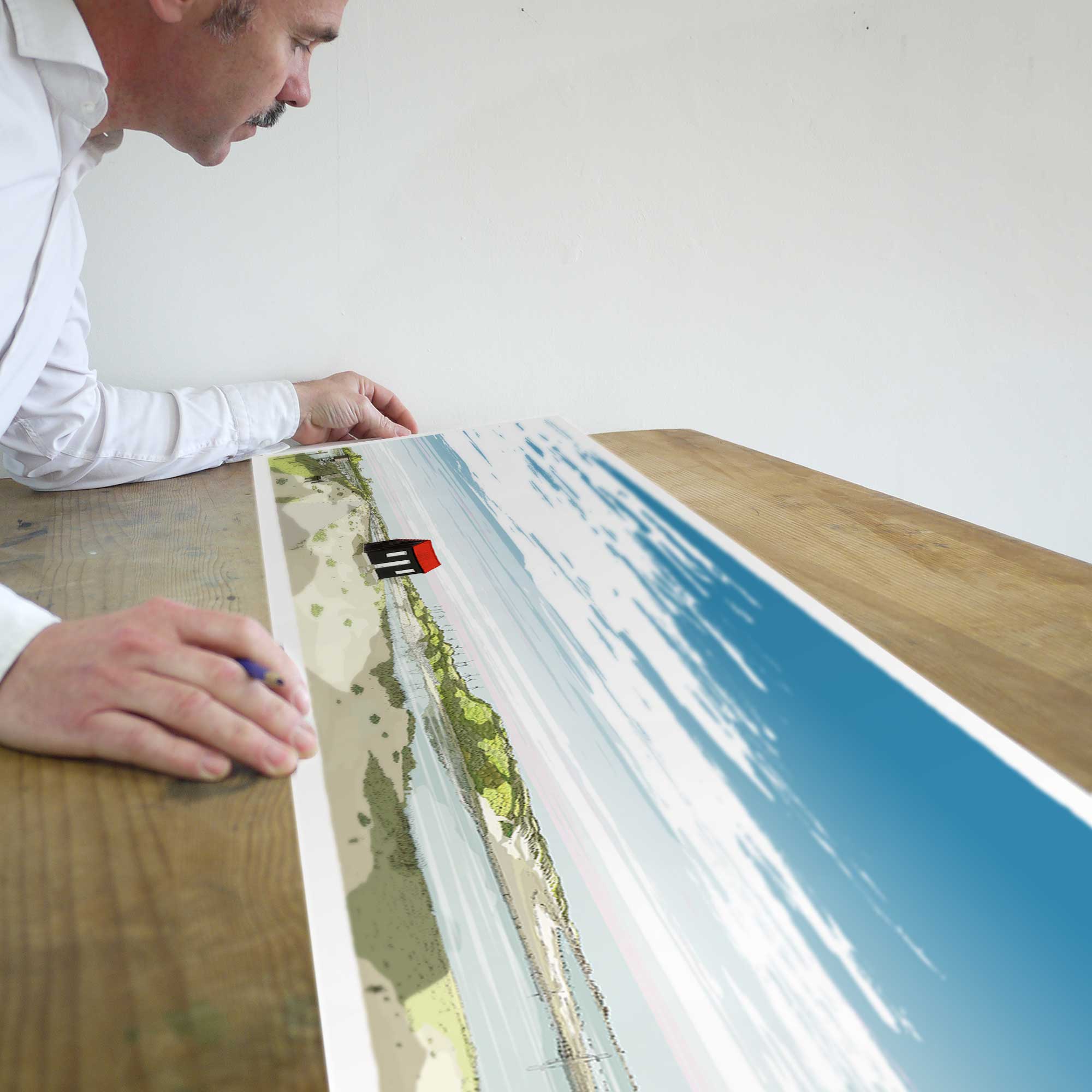 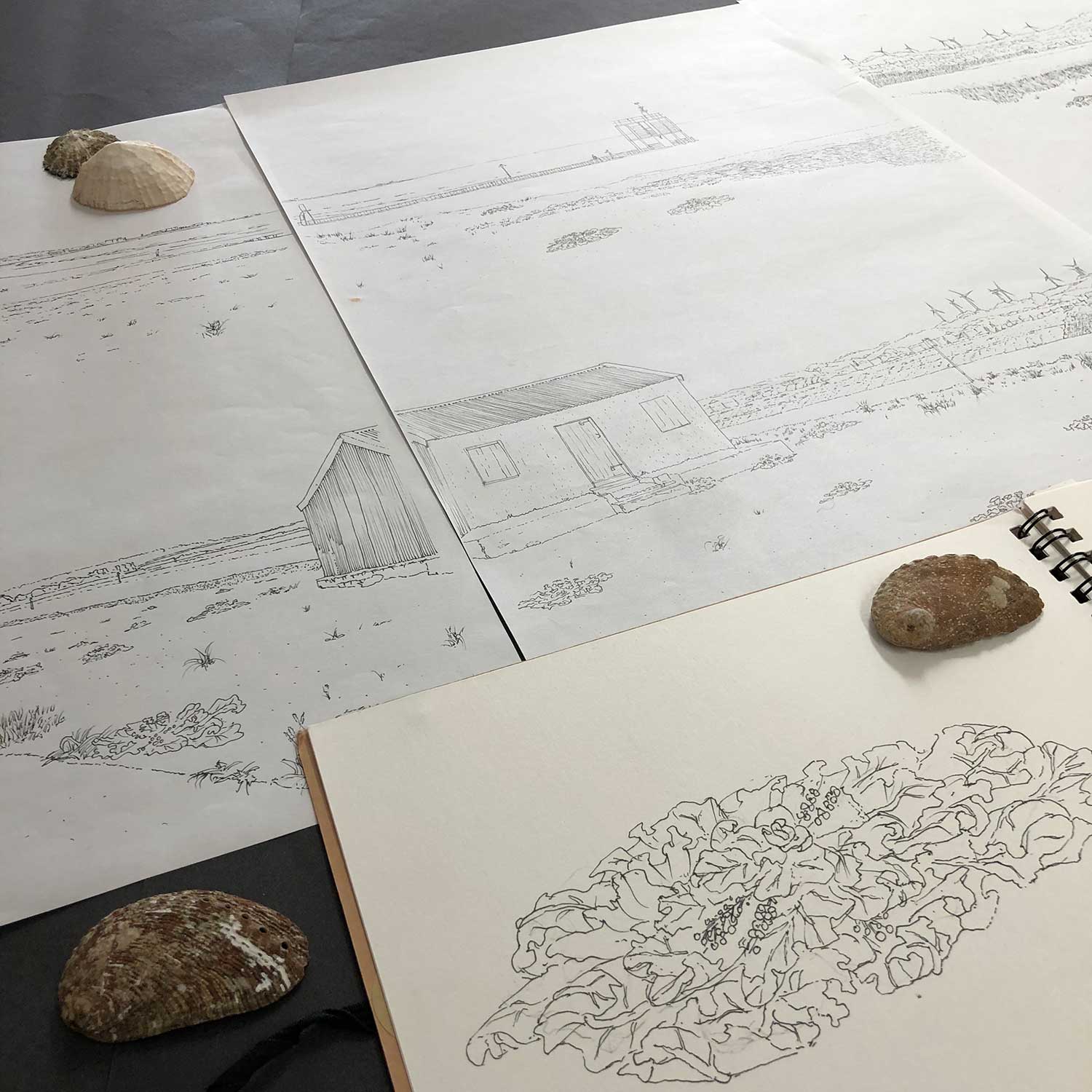 More about this print and the Red Roofed Hut

The small but perfectly formed famous Red Roofed Hut in Rye Harbour. And surrounding this brightly painted fishing hut you can see the salt marshes of the Rye Harbour Nature Reserve, the outline of the picturesque town of Rye. Rye Harbour is along the River Rother, and at the mouth of the river the popular Camber Sands Beach. The contemporary buildings and structures to this print are the Little Cheyne Court Wind Farm and Ray Harbour Discovery Centre.

Rye Harbour is a quintessentially British place 0n the Sussex Coast. I  first visited this in 2011 and in August 2020 I went there again. This time the purpose of my visit was to create a panoramic print to celebrate the essence of this place.

Rye Harbour village started 200 years ago. It stands on an extension of the shingle beaches that were gradually deposited by the sea over the last 800 years. The village has one of the chain of Martello Towers constructed during the Napoleonic Wars; it was built on the beachline of the time. These days the beachline has again advanced a further kilometre southward.

My print left to right shows first  Rye Harbour Nature Reserve , the salt marshes with the bird watching cabins; next to it and in the distance though still recognisable is Rye town with the historic Parish Church of St Mary.  This church was built in the 12th century and on clear days the views from the top of the bell tower are stunning. Further along, right next to the end of the path is the new Ray Harbour Discovery Centre. This building is currently being completed and on the opposite bank of the River Rother is the Rye Harbour.

The famous red roofed hut stands as the main subject of my print. In spite of its small scale, its striking looks define it as a colourful landmark in the landscape. For this very reason artists often portray this lovely building. My panoramic print incorporates the surrounding landscape to make sense of the connection of this beacon and the immensity and scale of the land.

Next in my print, particularly important you can see, popping over the dunes, the Little Cheyne Court Wind Farm.  Npower Renewables  built this plant in 2008 at a cost around £50 million. It comprises 26 wind turbines, each 115 metres high, distributed over an area of 4 km2 .

I love portraying contemporary structures in my prints, this element dates my print for the future and makes them current. This one markedly emphasizes my  interest in green technologies. Admittedly controversy arose around the construction of this engineering project that sits in the middle of a natural reserve.

Finally my print ends with the view of possibly the most famous sandy beach in England, Camber Sands. Namely the only sand dune system in East Sussex, located to the east of the estuary of the River Rother at Rye Bay stretching 3 miles to just beyond the Kent border. Comparable sites are West Wittering and Avon Beach.

A large section of the western end of the dunes lie within the Camber Sands and Rye Saltings Site of Special Scientific Interest, while the rest is designated a Site of Nature Conservation Importance.

Interestingly during the Second World War and inland to the east, the dunes were fortified and used for exercises. There is a roughly square Military of Defense (MoD) danger area and base inland to the east of the area. The dunes resemble topographically those seen in parts of Normandy and challenging desert terrain.

Furthermore If you enjoyed this print you might enjoy reading about my other print depicting a similar fishing cottage. Please follow this link to read about my print :‘ Ce Blue Dungeness Derek Jarman Prospect Cottage’