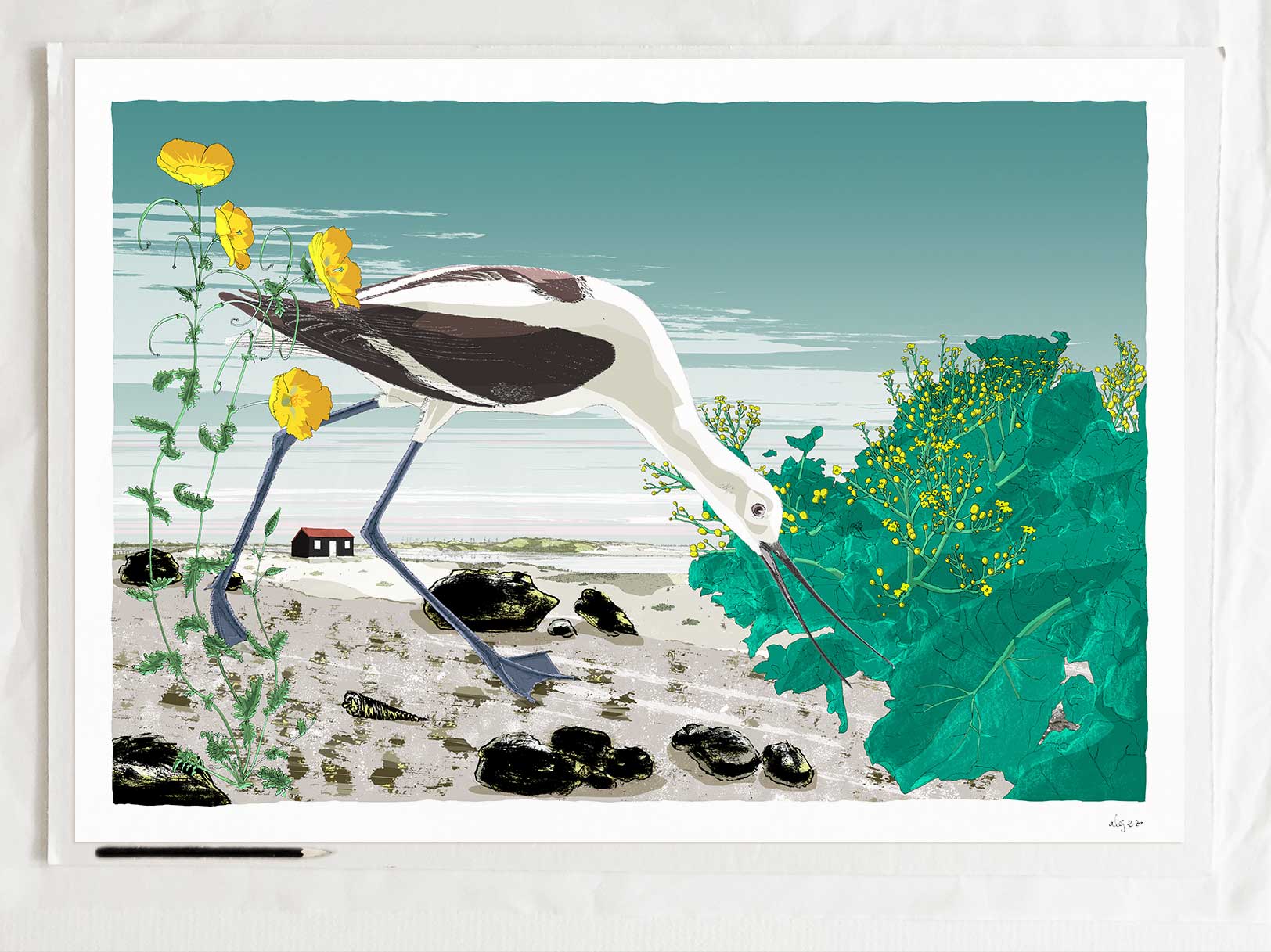 This art print depicts the figure of an avocet in the shingle habitat or Rye Harbour, by the iconic Red Roofed Hut.

The story of the avocets in the UK is a success story. Sadly avocets were extinct as a breeding bird in the UK between 1893 and 1941. But then the first pairs returned to Suffolk and spread around the country through a network of coastal nature reserves. A couple nested for the first time in 2002 at Rye Harbour and they became established there in 2006 after new sea defence work created saline lagoons with islands suitable for nesting. There have been as many as 68 breeding pairs at Rye Harbour in recent years.

My interest in these lovely birds happened by chance. Last year my friend Tom took one of my prints to Avocet Gallery in Rye Harbour. Since then following a few visits to this lovely gallery my interest in the avocet grew.

The Red Roof Hut stands strikingly painted in black and red in a muted landscape. This fishing hut is within the salt marshes of the Rye Harbour Nature Reserve and in the distance is the outline of the picturesque town of Rye. Rye Harbour is situated on the River Rother, where the popular Camber Sands Beach is to be found at the mouth of the river.

In January 2021, I found in a second hand bookshop the second volume of a lavish 1966 publication that reproduced the famous original watercolour paintings by John James Audubon for ‘Birds of America’. With a curious mind I realised that often one of his images would take years to create and often various artists would be involved. Often Audubon would create the main image and other artists would do the plants and another would add the landscape. Initially when you look at them you instantly think erroneously that it was a design conceived in one, but no. With this in mind I have created three new prints that follow this system and create a scene that collages a landscape with a habitat with its characteristic plants and birds. The result is a print that mimics a theatre stage design where each subject is depicted at its best together.

Glaucium flavum, the yellow horned poppy or sea poppy, is a summer flowering plant in the family Papaveraceae. It is native to Europe, Northern Africa, Macaronesia and temperate zones in Western Asia. I first saw these in Dungeness where they grow in the most peculiar way in a singular parallel line along the coast – maybe thirty metres from the shore creating a long line as if they were on parade. It is never found inland. All parts of the plant, including the seeds, are toxic – so be careful!

Sea kale or cambe maritima, is a species of halophytic-salt-tolerant-flowering plant in the genus Crambe of the family Brassicaceae. It grows wild along the coasts of mainland Europe and the British Isles.The plant is related to the cabbage and was first cultivated as a vegetable in Britain around the turn of the 18th century. Blanched stems are eaten as a vegetable and became popular in the mid-19th century.

If you liked this print please follow this link to Animal Art and discover a collection of prints that focuses in the natural -and supernatural- world.