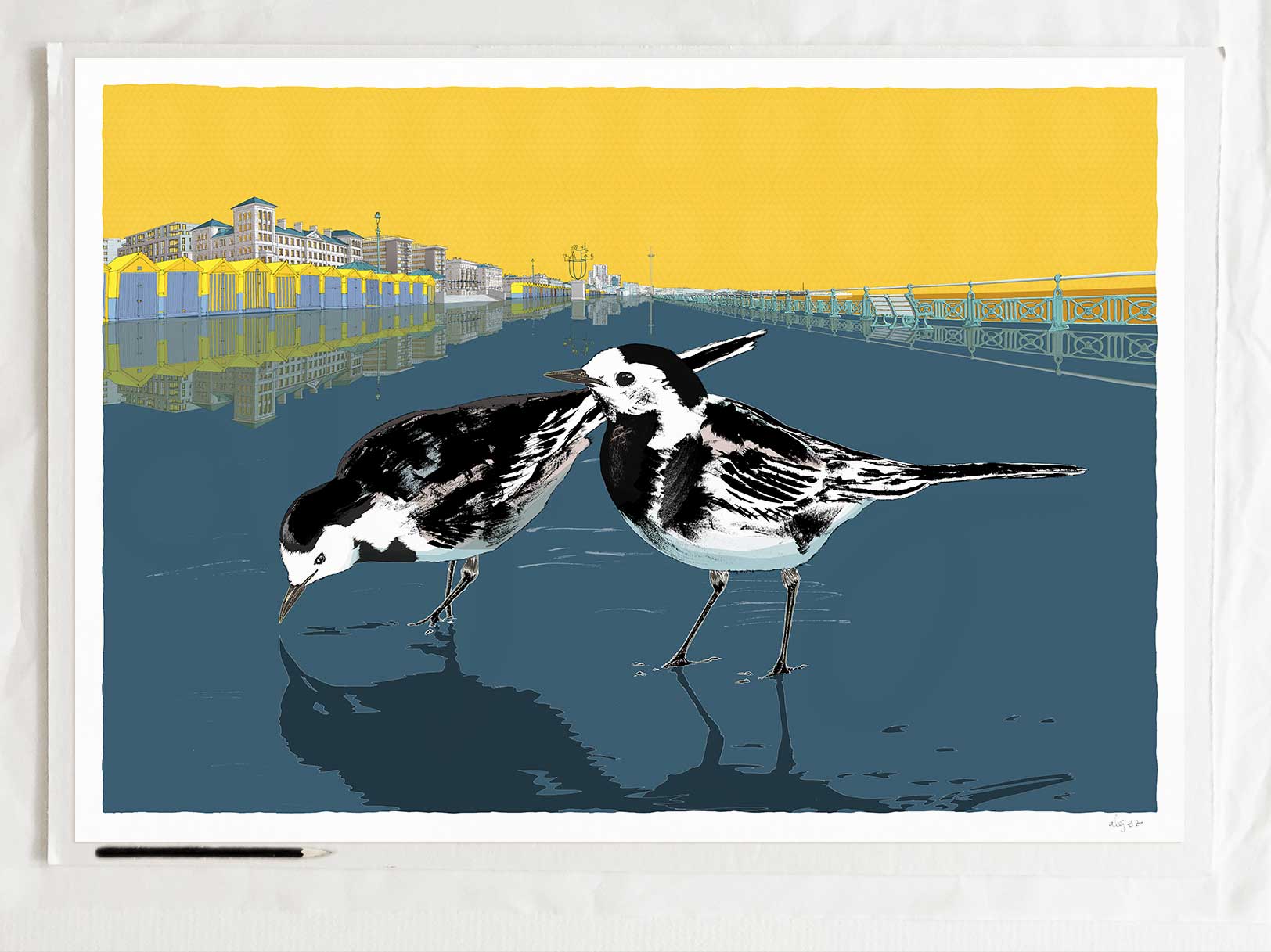 This art print depicts two wagtails as often seen at Brighton seafront, this two in particular, by Hove Plinth and Kings Road.

The pied wagtail is a familiar bird across Brighton and Hove. Its black-and-white markings and long, wagging tail make it easy to identify as it hops across the road or lawn.

Pied wagtails eat insects, but will feed on seeds and even rubbish in winter. They flock together at warm roost sites like reedbeds and sewage works or trees and bushes in city centres. In summer, they defend breeding territories and will nest in ivy, under roofs, in walls, between stones. You can easily identify the pied wagtail as it is a familiar black-and-white bird, with a white face, white belly and white bars on the wings.

Artists Open Houses is a fantastic festival in Brighton. In the past I have exhibited on a few occasions in an Open House called ‘Reflections of Light and Colour’. The house is run by my very good friend Janice and her husband Rhys helps too. They are a very sporty couple, running marathons together in many locations around the world and often I see them running along the seafront. When I thought of naming these birds, the analogy immediately came to mind. Please meet wagtail Janice and Rhys. This adds a meaning to this print of a metaphor of friendship and gratefulness.

Hove Plinth is a community art project by Hove Civic Society on the historic Hove seafront. It endeavours to showcase a changing programme of contemporary sculpture. The first sculpture on Hove Plinth is Constellation by Jonathan Wright. This sculpture is part mechanical model of the solar system, part film camera and part ship’s compass. The sculpture is a celebration of Hove with images associated with Hove’s past and present.

Kings House was built between 1871 and 1874 by James Knowles; originally it was built as seven mansion blocks, and was based on the style of Osborne House on the Isle of Wight. It then became a hotel, called the Prince’s Hotel, before being used by the Royal Navy during the Second World War. It has currently been converted and extended to create sixty nine apartments.

The area of grass stretching from the Brighton boundary to St John’s Road is known as Hove Lawns and is possibly one of the most remarkable swathes of turf in the UK. The 1830 Act laid down that no building should be erected south of Brunswick Terrace; the only items allowed were fencing and street lights. The Lawns were looked after first by the Brunswick Square Commissioners, then by the Hove Commissioners, followed by Hove Council and from 1997 by Brighton & Hove Council.

My friend Clive describes the joy of owning a beach as ‘The piece of the coastline that is ours alone. To have a place to sit, to laugh, to socialise, to think, in front of an endlessly advancing and receding sea, while, above, the seagulls squawk and swoop, and life’s problems seem but a distant flag, waving on the horizon.’

From the beach huts you can look out at the sea and see people, People paddle-boarding in the still, cerulean waters, or your next beach hut neighbours in flip-flops, carrying wine coolers and hampers. In your beach hut you can read the paper, sunbathe, chill. You can make yourself a cup of tea after a dip in the sea. Beach huts are leisure at its best.

This art print has a seaside theme. If you liked this print you can discover more Coastal Art prints in this link.