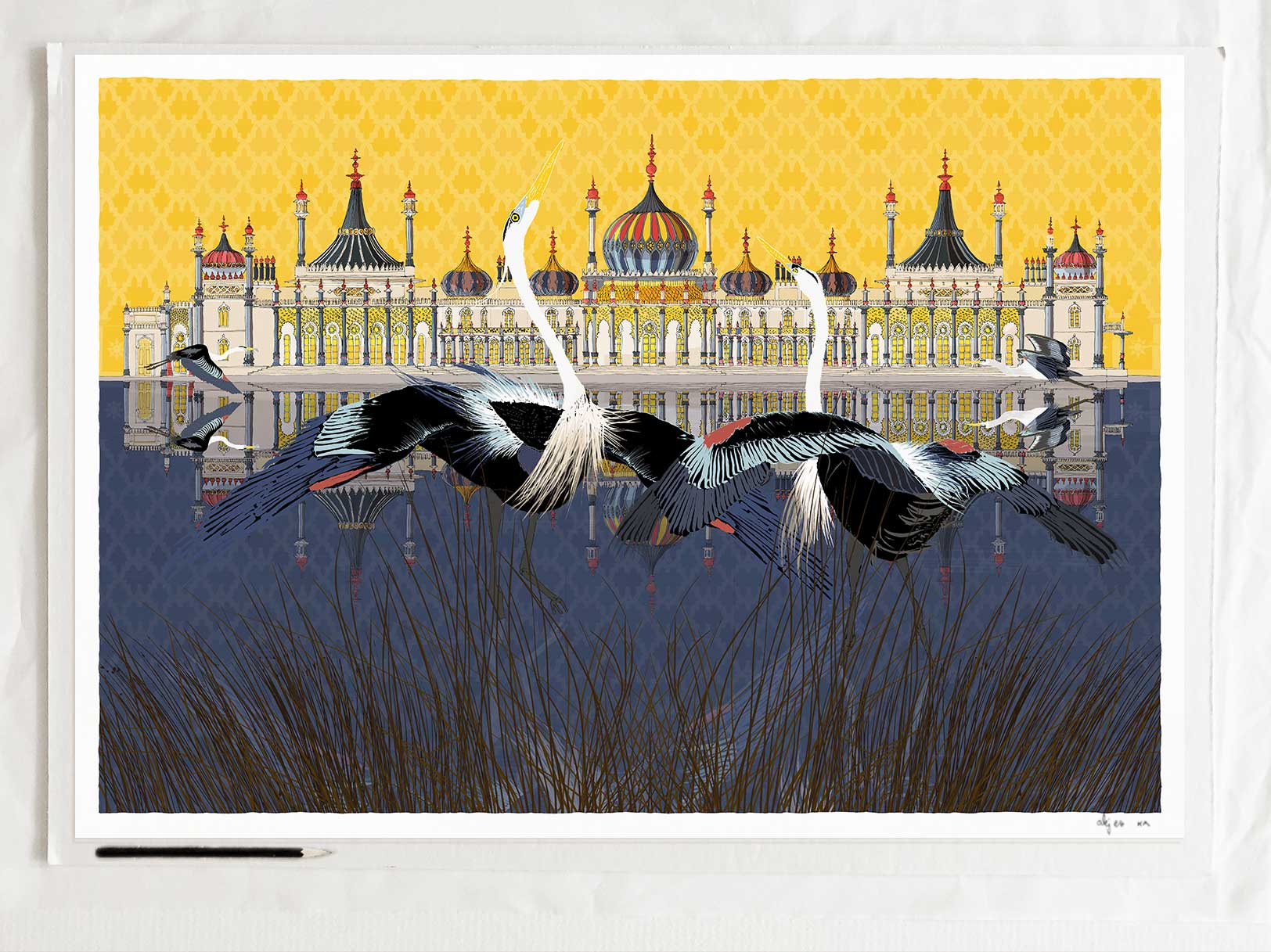 This ‘Heron Print’ shows two dancing herons in front of the Brighton Royal Pavilion. This royal residence was built at the banks of the Steine river. Historically this area of marsh land would have been teaming with wildlife. This art print celebrates that past when nature was closer to us.

The Heron in history and symbolism.

And that the heron dared to fly.
It is afraid of rainstorms, and flies above the clouds so
that it cannot feel the storms in the clouds, and whenever
it flies higher, this indicates a storm.

The Brighton Royal Pavilion is a wonderful source of inspiration for art.

The interior is fitted in chinoiserie style and herons are depicted in wonderful hand painted wall papers in different rooms.

The sky in this print is reminiscent of the tile decorations of the Alcazar Palace in Seville.

The Royal Alcázars of Seville, historically known as al-Qasr al-Muriq and commonly known as the Alcázar of Seville, is a royal palace in Seville, Spain, built for the  king Peter of Castile. The palace has many wonderful buildings and gardens though my favourite is the ‘Patio de las Doncellas’. This courtyard (patio in Spanish) was the centre of the public area of King Peter I Palace. It is surrounded by poly lobed arches, one of the most characteristic decorative motifs of the Almohad dynasty, along with the sebka style. The shell (symbol of fertility and life), the Hand of Fatima, (synonymous of protection), geometric compositions, schematic plant decoration and Kußc Arabic epigraphy complete the decorative language of this courtyard. The gallery surrounding the main courtyard is composed of epigraphic decoration made of plaster. The bottom of the walls are decorated with ceramics, following the “alicatado” technique. The central part of the Maidens Courtyard was covered with marble slabs, with a Renaissance fountain during almost 500 years. After the archaeological excavations of 2005, it was restored as established in the fourteenth century.

I have named the colour palette for this collection ‘Orient Nights’. It combines steel blue hues and mustard seed tones reminiscent of far away whispered tales and legends. It echoes memories of India, Turkey and Morocco. Nights spent by streams, on roadside cafes with fairy lights and tented roofs, next to ancient temples, cobbled roads and life as it presents itself.