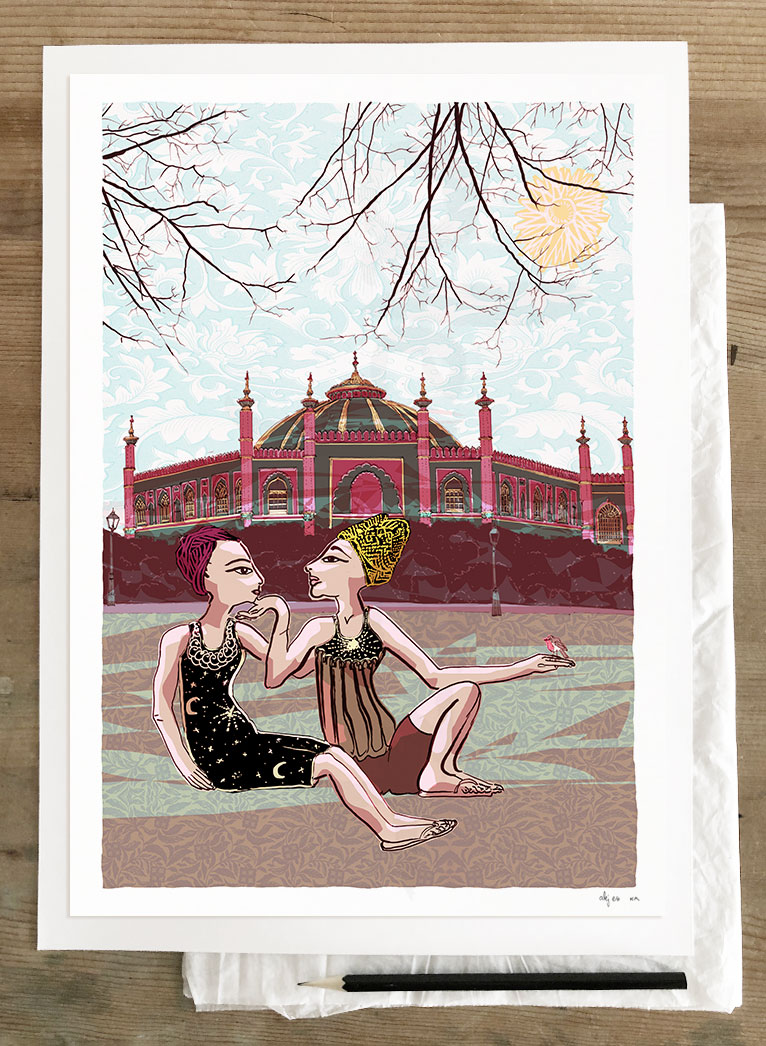 A Red Robin at Pavilion Gardens by Brighton Dome

‘A Red Robin at Pavilion Gardens by Brighton Dome.’

These two characters, who thousands of years ago, used to own some of the objects now displayed at the Egyptian Gallery in Brighton Museum, have come back to life.

And here they are at Pavilion Gardens next to Brighton Dome. One of them is dressed with the moon and the stars, the other wears the sun on her chest while a red robin rests in her hand. Together they form the universe and today they are just meeting together.

Their meeting place is one of Brighton’s favourite spots, Pavilion Gardens by Brighton Dome.

I created this print from my original ink drawings to which I apply colour digitally. Printed on fine art paper using archival inks, the prints are available in size A1, A2, A3 or A4 as limited editions of 100 and each print is individually signed and numbered.

The Egyptian Galleries at Brighton Museum

Did you know there is an Ancient Egypt Gallery on the ground floor of Brighton Museum?
Born in Brighton, Francis Llewellyn Griffith (1862-1934), became a famous Egyptologist and many of the items displayed in this gallery were found by him.

But ultimately it was thanks to his brother Arthur, a Brighton solicitor and alderman, that Brighton Museum received the pieces.

One of the most singular objects in the gallery is a cosmetic palette which still has traces of ground green eye-paint on the surface. Francis discovered it in the early 1900s at Faras, in Nubia, in a burial ground probably dated between 3500 and 3000 BC.

Have you been to a concert at The Brighton Dome? George IV conceived this building as the stables for the Royal Pavilion. Architect Robert Atkinson (1883-1952) transformed the Concert Hall into the Art Deco Style venue we recognise today. He also re-purposed the Corn Exchange and designed the building that would eventually become the Studio Theatre.

In my print you can see the iconic shape of the finial that covers the central dome. Sometimes these rooftops are open to visit in special events, where you can walk over the theatre trellises? to look down at the auditorium. And you can also look up and admire the double shell that comprises the cover of the dome as the current Art Deco shell hides the Indo-Saracenic original cupola that has an incredible structure with beautiful glass lanterns from Regency times.

When Amenhotep IV became king of Egypt in the 18th dynasty he broke with religious and political tradition and worshipped the sun as a creative force called the Aten.

He changed his name to Akhenaten and built a new capital city called Akhetaten (now known as Tell el- Amarna) where he lived with his queen Nefertiti and their six daughters in the new royal palace, parts of which are replicated here including a fragment of the painted floor.

The informal theme of palace life is beautifully conveyed in the ‘Princesses fresco’ displayed in the wall case on the right. This fragment of wall painting is the lower part of a scene depicting Akhenaten and Nefertiti relaxing with their daughters, two of whom are sitting casually on floor cushions in the foreground. The informal style and subject of this painting was in direct contrast to conventional Egyptian art.

A headless statue of Akhenaten holding an offering table is displayed in the centre of the gallery. It may have suffered this damage after the end of his reign when there was a counter-revolution and a return to orthodoxy. Images of the royal family and their monuments were destroyed and the court returned to Thebes.

Original base ink drawings for the art print.

I work from original line drawings, these are scanned and colour is added digitally. I print my designs on art paper with archival inks and issue them as limited edition art prints, each one signed and dated. For queries please use the contact section and I will get back to you. 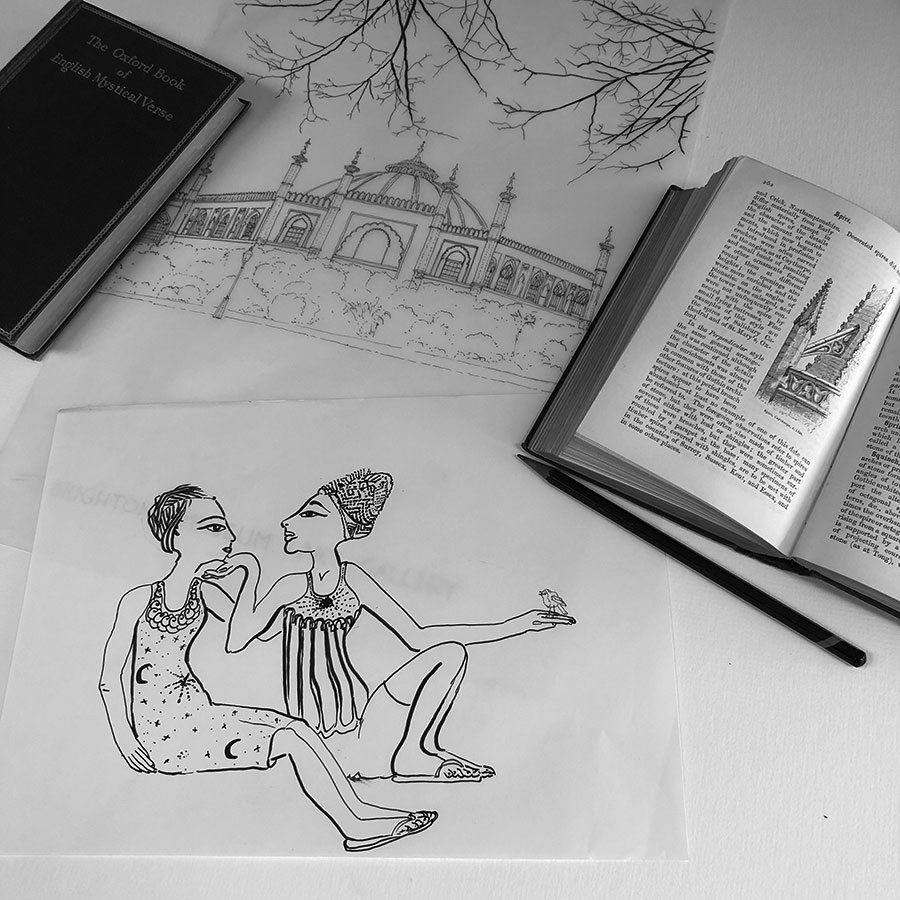