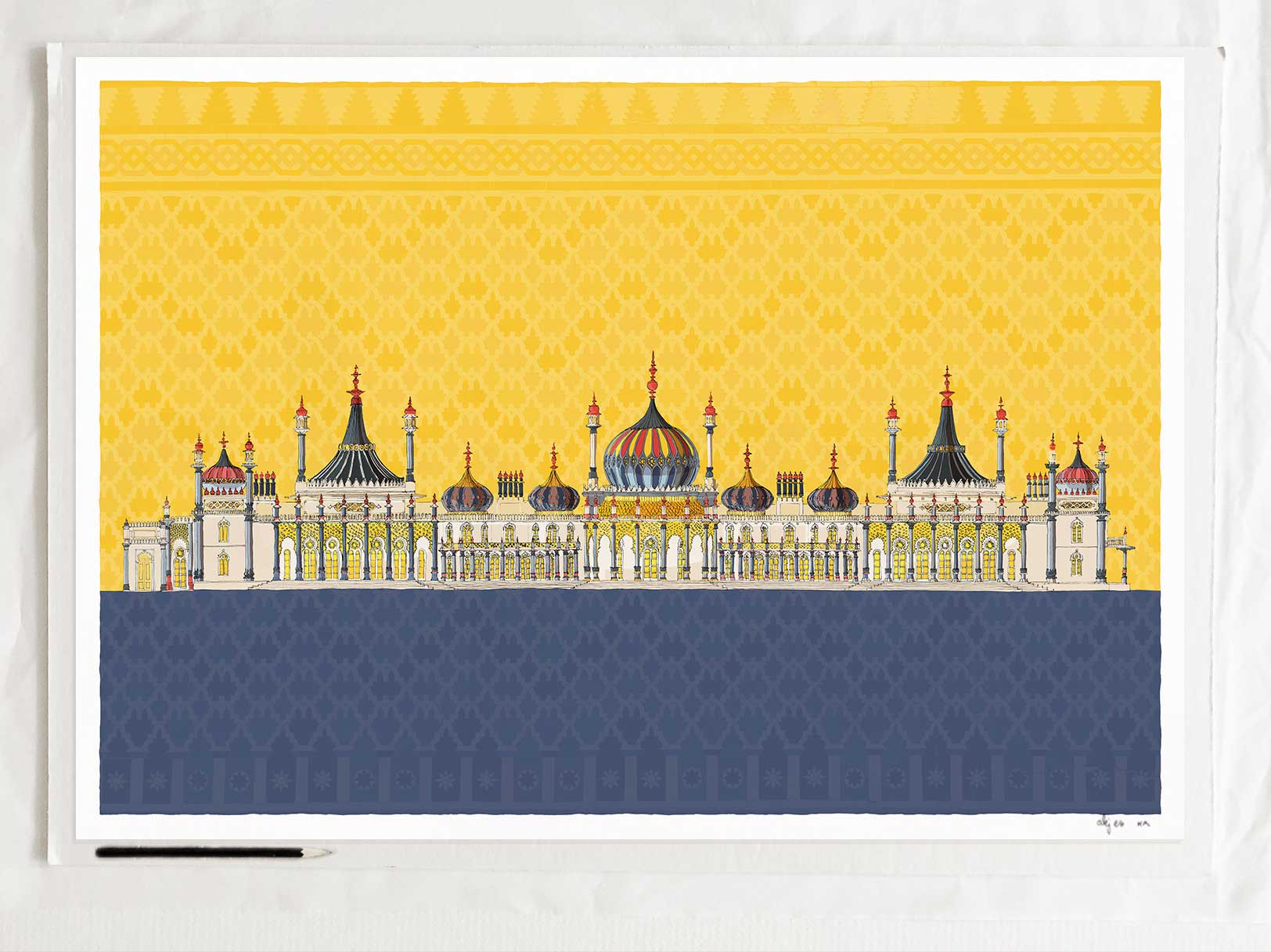 Architectural art print of the West elevation of the Brighton Royal pavilion. The colour palette ‘Orient Nights’ combines steel blue and mustard seed reminiscent of far away whispered tales and legends. Islamic glazed ceramic mosaics creates the backdrop for the Pavilion. These form an architectural screen with a myriad of lobed intersecting double arches. A design that echoes the delicate works found at the Patio de las Doncellas in the Alcazar Palace in Seville.

Digital pigment print from original ink drawings. Printed on fine art paper using archival inks. Available in sizes A0,A1, A2, A3 or A4 as limited editions of 100. Each print individually signed and numbered.

The Royal Alcázars of Seville, historically known as al-Qasr al-Muriq and commonly known as the Alcázar of Seville, is a royal palace in Seville, Spain, built for the  king Peter of Castile. The palace has many wonderful buildings and gardens though my favourite is the ‘Patio de las Doncellas’. This courtyard (patio in Spanish) was the center of the public area of King Peter I Palace. It is surrounded by poly lobed arches, one of the most characteristic decorative motifs of the Almohad dynasty, along with the sebka style. The shell (symbol of fertility and life), the Hand of Fatima, (synonymous of protection), geometric compositions, schematic plant decoration and Kußc Arabic epigraphy complete the decorative language of this courtyard. The gallery surrounding the main courtyard is composed by epigraphic decoration made of plaster. The bottom of the walls are decorated with ceramics, following the “alicatado” technique. The central part of the Maidens Courtyard was covered with marble slabs, with a Renaissance fountain during almost 500 years. After the archaeological excavations of 2005, it was restored as established in the fourteenth century.

I have named this collection ‘Orient Nights’. It echoes memories of India, Turkey. Nights spent by streams, on road side cafes with fairy lights and tented roofs, next to ancient temples and constructions.