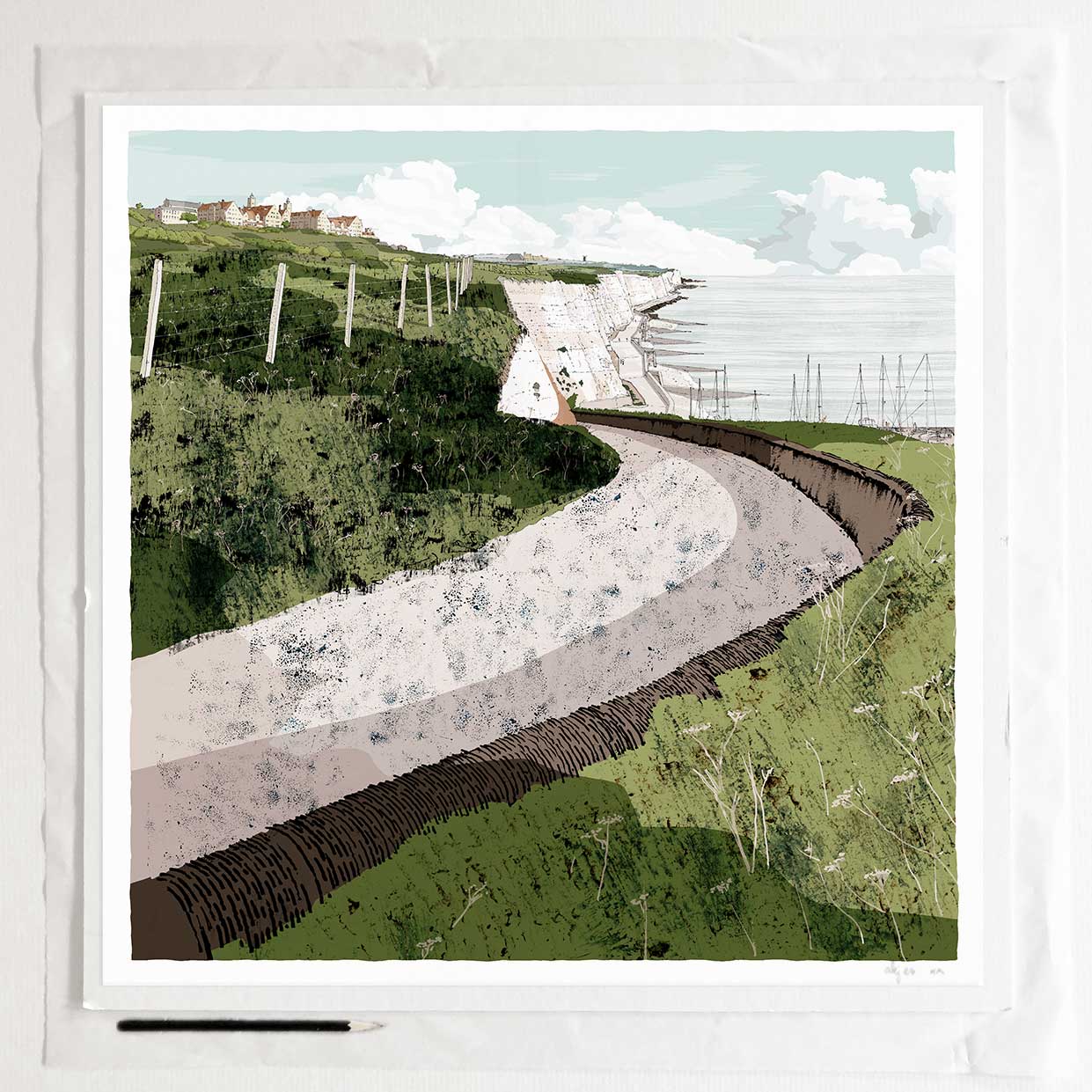 Aerial perspective view from the Brighton cliff top walk of Roedean School the path towards the undercliff walk and the Brighton Marina boats.

I created this print from my original ink drawings to which I apply colour digitally. Printed on fine art paper using archival inks. From a limited edition of 100. I individually sign and number each print.

Roedean School is set  at the top of a cliff on the Sussex Downs with commanding views of the English Channel. It was founded in 1885 in Roedean Village on the outskirts of Brighton, East Sussex, England. The school motto, Honneur aulx dignes, is in Norman French, and means “Honour the worthy”.

The school was founded in 1885 as Wimbledon House by three sisters: Penelope, Millicent, and Dorothy Lawrence with the aim to prepare girls for entrance to the newly opened women’s colleges at Cambridge University, Girton  and Newnham Colleges. It was first located in a house in nearby Lewes Crescent and  in 1898, the school moved to its present site, occupying new buildings designed by the architect Sir John Simpson.

In 1928 the parish of Rottingdean was incorporated into Brighton. In order to protect its new coastline, which had increased from 2.2 to 5.4 miles, and also to safeguard the vital intercepting sewer, the county borough council embarked on a great scheme to protect the cliffs to the east of Black Rock.  The result was the Undercliff Walk , a sea-wall at the base of the cliffs designed by borough engineer David Edwards. It was constructed in 1930-3 at a cost of £360,000, and used some 13,000 tons of cement, 150,000 concrete blocks, and 500 men at a time of severe depression, although there was controversy over the ‘importation’ of Welsh miners to do skilled rock work.

The walk was formally opened from Black Rock to Rottingdean , about 2.3 miles, on 4 July 1933 by Minister of Health Sir Hilton Young at Ovingdean Gap. The extension to Saltdean Gap was formally opened by the mayor, Edward Denne, on 29 July 1935 at the same time as the Rottingdean swimming-pool which was built to replace bathing facilities lost to the sea-wall. A sea-water pool 100 feet by 35 feet, it has few facilities but occupies a wonderful location below the cliffs. In 1989 it was privately managed, but the storms of January 1990 caused £100,000 worth of damage.
The last 200 yards of the sea-wall to the borough boundary opened a few months later, and a 310-yard extension by Chailey Rural District Council was opened in 1963.