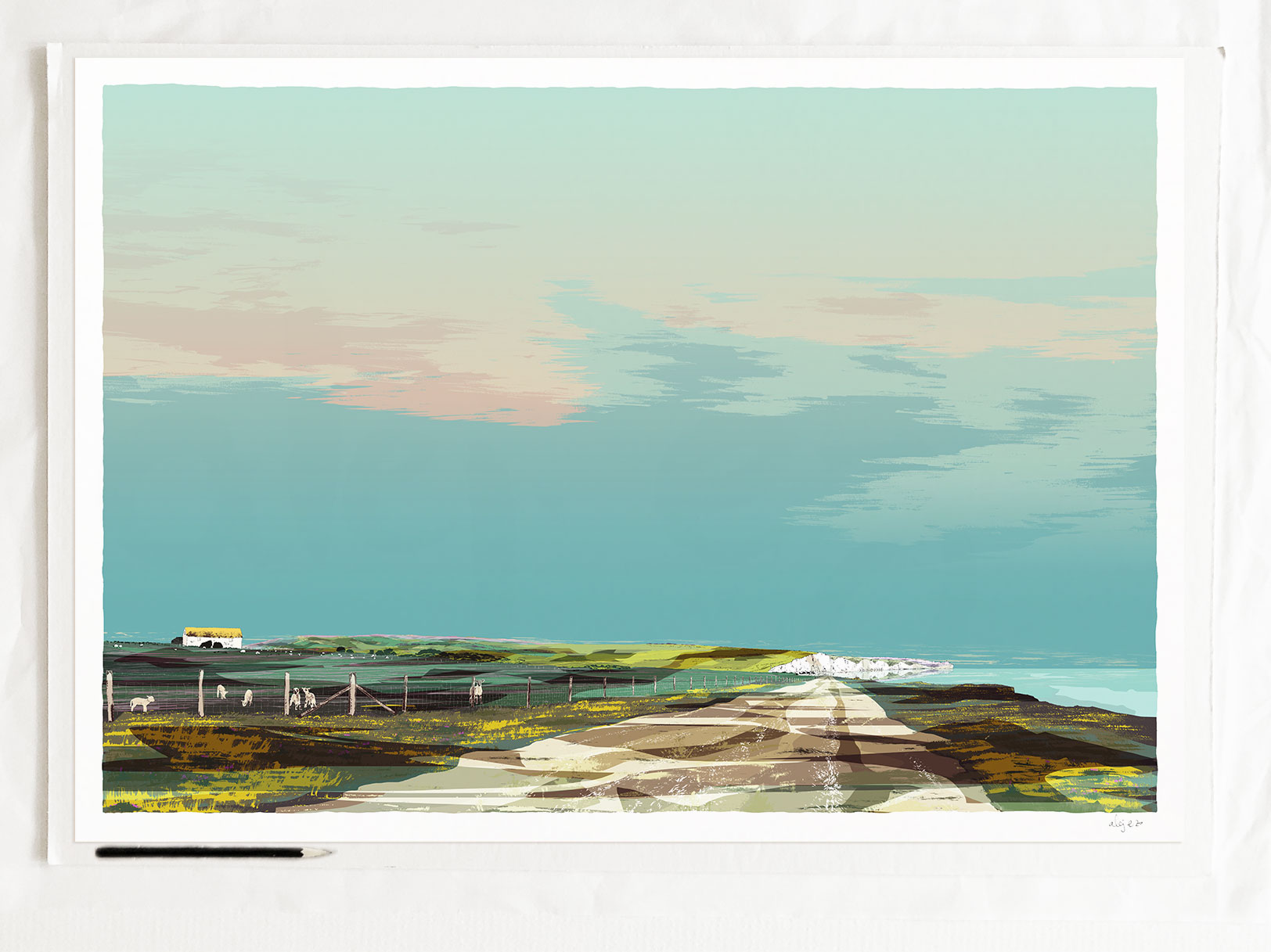 View of the South Downs in springtime. The coast, the cliffs and the fields with gorse and rapeseed bloom. This view is from Castle Hill looking towards Seaford, Cuckmere Haven and beyond.

‘Always try to keep a patch of sky above your life.‘ Marcel Proust, Swann’s Way.

I create each print out of my own hand drawn ink drawings that I color digitally. I print my design using fine art paper and archival inks, and release each print as part of a limited edition of 100 for the standard sizes 0,A1, A2, A3 or A4. Each print has my signature and edition number.

In April 2022 I did the walk from Brighton to Lewes from Woodingdean. From Castle Hill this view towards Seaford and Cuckmere Haven encapsulates the outstanding beauty of the South Downs and the coast together. That day the aromatic yellow flowers of the gorse formed ochre clouds over the fields and the rapeseed in distance created a carpet of light. Later in the week, at the West Pier Centre where I am Artist in Residence I started the composition of this print.

I look in landscapes for patterns and elements that repeat and repeat, with rhythm and different forms, a bit like music. This repetition creates a structure that I find very soothing to the soul. Sometimes recognizable landmarks appear as in this print I show the cliffs in Seaford Head and Cuckmere Haven in the distance. This is  one of my favourite bits of the coastline.

This print is a homage to two artists that lived in Seaford and created a series of Japanese style woodcuts depicting the Seaford and its surrounds.  Friend and teacher to Eric Slater, Authur Rigden Read (1879-1955) was an internationally acclaimed woodcut artist who used colour to produce this artwork from his studio in Winchelsea. He and Slater were both awarded gold medals by the Society of California Printmakers.

The Seven Sisters cliffs take the name for each of the seven hills that form this landscape. These cliffs are the remnants of dry valleys in the chalk South Downs, which are gradually being eroded by the sea. The name Seven Sisters relates to the number of peaks and dips which are the following: Haven Brow, Short Bottom, Short Brow, Limekiln Bottom, Rough Brow, Rough Bottom, Brass Point, Gap Bottom, Flagstaff Point, Flagstaff Bottom, Flat Hill, Flathill Bottom, Baily’s Hill, Michel Dean and Went Hill Brow. Since I moved to Brighton in 2007 I have paid many visits to the Seven Sisters Country Park. This particular walk starts by taking the train to Seaford, walking along the promenade and then climbing up Seaford Head. Once passed its summit the view of the Seven Sisters is revealed.

Have you ever been on a walk in the South Downs in a day with large cumulus clouds that shoot up to the sky? They dwarf any feature in the landscape and turn us into miniscule beings. The sun shimmers in the haze and the cliffs, like limelight in old fashion theatres, project a blinding light to the spectator.  Many artists have captured this light and their work is present in my consciousness during the art creation process. Among others I like feel drawn to past artist that have also dwelt and depicted the South East such as Samuel Palmer with his romantic landscapes watercolours of the cliffs, William Blake idyllic images of Felpham, Constable clouds of Brighton and Hove, Eric Slater and Arthur Ridgen soft Japanese woodblock prints of seascapes and seagulls. All these artists captured the light and essence of this land.